Your Wish Is Our Command

Bronx Science Presents ‘Into the Woods’ 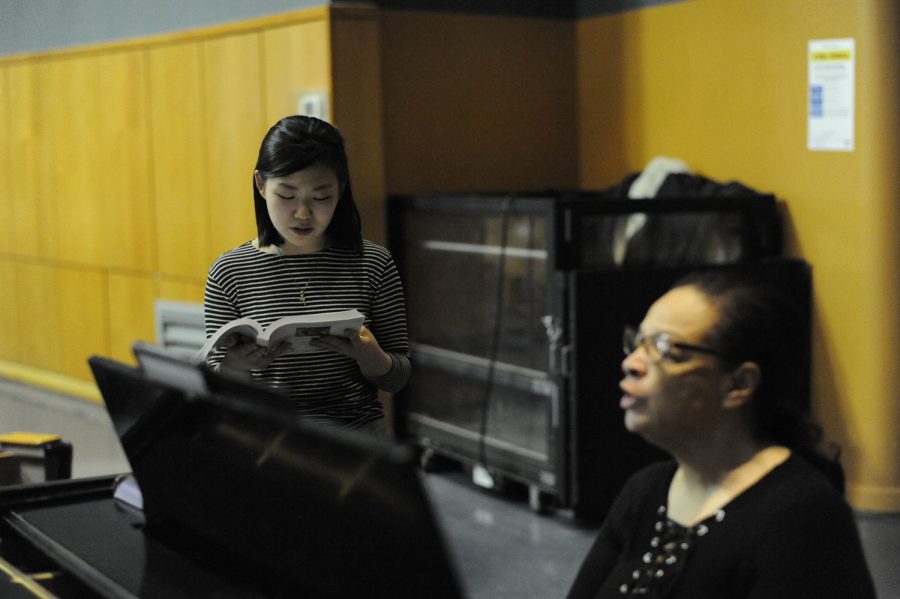 In rehearsal, Victoria Ono ’19 works with the musical director on the opening number for her role as the understudy for the Baker’s Wife.

Students gather around the piano in the dim lighting of the auditorium. As the pianist guides them through musical scales, the three student directors discuss their plans for the rehearsal. With the harmonies of the thirty-two person cast echoing through the auditorium and lobby, anyone who passes through the first floor knows that ‘Into the Woods’ was coming to Bronx Science.

Into the Woods is a favorite amongst the cast and crew and is “[the] most amazing musical to have ever hit Broadway,” according to Chloe Schamisso ’21. This fairytale-inspired show, written by James Lapine and orchestrated by Stephen Sondheim, is highly regarded, grossing over two-hundred million dollars when Disney released their movie adaptation of the musical in 2014.

With talented celebrities like Meryl Streep (the Witch) and James Corden (the Baker) starring in the film version, it may seem daunting to assume the same roles. Still, the performers of Bronx Science remained committed to the process, dedicating long hours after school to rehearse.

Other members of crew, with more specialized duties such as lighting or makeup, are also gearing up for the show. Margaret Duffy ’21, the assistant head of costumes, said, “We help with quick changes backstage, choosing which costume pieces the characters should wear, keeping the costumes clean, and making sure nothing is torn or broken.”

Duffy is one of several crew members who are a part of running crew, meaning she assumes tasks both before and during the show. In Duffy’s case, her tasks are maintaining and managing costumes as well as helping to assemble them. “An especially exciting thing with ‘Into the Woods’ is that we have to assemble two fursuits for Milky White and the Wolf,” Duffy added. With the more fantastical setting, the show features some outlandish characters. “We also need a very long wig for Rapunzel,” she notes.

Despite the trying tasks, the crew considers the musical to be a labor of love. “Originally I didn’t have much experience with the show, but I did attend the first full cast read-through of the script,” Klingborg said. “The cast is full of talented people and I’m excited to see the final result of everyone’s hard work.”

As the drama department is known for its impressive shows, many students cleared their calendars for the opening night in late May.

No matter how involved you are with the drama department, the cast and crew hope you saw ‘Into the Woods.’ With a phenomenal cast and dedicated crew, you are sure to have received everything that you could have wished for in this fantastical theater experience.