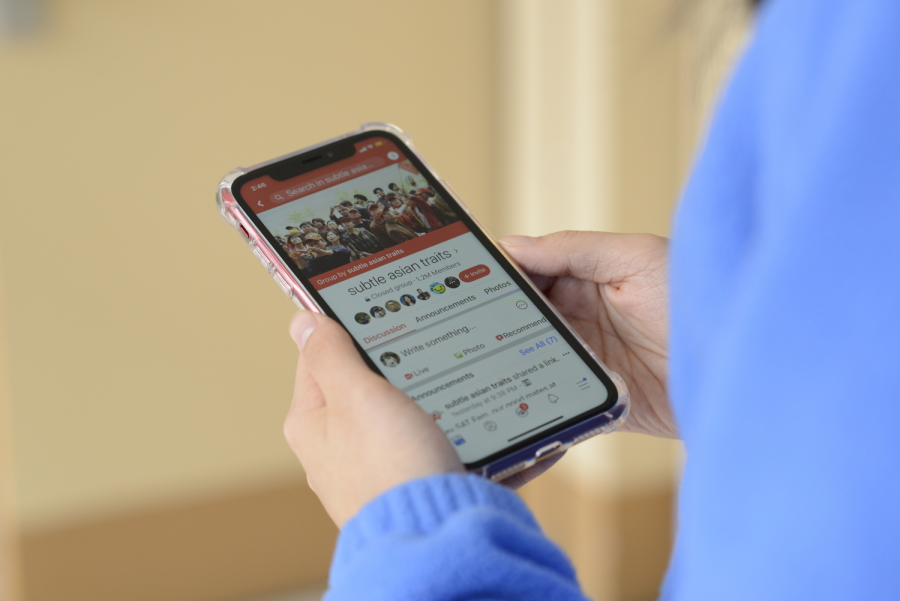 Ellen Ren ‘19 browses through Subtle Asian Traits’ homepage, which is the source of hundreds of new posts every day.

In September 2018, Facebook welcomed a new group to its community: Subtle Asian Traits (known to some as SAT). The group is the source of thousands of posts, which consist mainly of memes and pictures of traits that are subtly Asian, as the name suggests. What started as a Facebook group is now a place where Asians all over the world can share their relatable experiences, characteristics, and cultural tendencies.

The group’s content is inclusive of many cultures, from East to South Asian. Regardless of the cultural heritage that members associate with, many are able to relate to the laughable stereotypes, language puns, and love of bubble tea.

Based in Melbourne, Australia, Subtle Asian Traits was originally inspired by a Facebook group known as Subtle Private School Traits, where students who had gone to the same Chinese school shared experiences and jokes. According to admin Darren Qiang, it was thought that it might be fun for local Asians to create a platform for Asian-oriented memes and nothing more.
“While growing up in the Bronx, it was hard to find another Chinese family that I could relate to. Not only has this group brought my friends and family closer, but it has also shown the world that when together, the Asian community is a powerful one.”
While Subtle Asian Traits started as a group made just for fun, it has had meaningful impacts on the lives of its members, even bringing attention to larger issues and aspects of society that were once unrecognized. In fact, many members of the Bronx Science community in the group have experienced such effects firsthand.

Tomson Zhang ’19 is a member of the group who discovered SAT from a shared post. “My friends were sending me memes of Chinese sayings, which I’ve never really experienced before,” Zhang said. Now, he not only finds entertainment in the memes available on SAT’s Facebook page each day, but comfort in the fact that there were others who share his experiences. “While growing up in the Bronx, it was hard to find another Chinese family that I could relate to. Not only has this group brought my friends and family closer, but it has also shown the world that when together, the Asian community is a powerful one.”

Suporna Das ’20 also feels that the group allows for a sense of community through the sharing of certain experiences. “Some members share problematic stories about a racist encounter while they’re out with friends or about feeling under pressure from strict parents,” said Das. “Whenever someone shares a story like that, you can bet that half the community will be ready to give support and let them know that they’re not alone!” This is one of the many significant qualities that allowed Subtle Asian Traits to go viral, the ability to be a strong support system for members of the Asian community who may need one.

Additionally, SAT creates an understanding environment where things that may seem abnormal to non-Asians are shared and encouraged. “There’s a lot of stereotyping with Asians, always. I think that if we tell people who aren’t Asian parts of our lifestyle or some of our habits, they might stereotype and look down upon it simply because they don’t understand our roots,” said Ellen Ren ’19. “I think that in SAT, it’s completely safe, if not encouraged to share anything that may seem ‘out of the ordinary’ to other people who aren’t Asian and have people react well and say they experience the same.”

It is clear that the group has helped to bring the Asian community together through enjoyable content while also providing comfort and support to those who need it, and according to Kin Yang ’20, the group provides additional representation that may be missing in American media. “In SAT, every individual has the power to have their voice heard and to share unique experiences that may not be heard in mainstream media,” said Yang. “Within the Facebook group, relatable content spreads very quickly, and the group serves as a stepping stone for representation that Asian Americans are missing.” Yang believes that while there are famous Asian-American influencers who contribute to media representation, SAT is more personal since its content comes from the perspectives of ordinary people.

Numerous administrators and moderators of Subtle Asian Traits enjoy and appreciate the group as much as its members. Admin Qiang feels that his favorite part of being an Admin is getting to connect with members. “It’s great being able to respond to others and help out with any problems and inquiries they have. It’s also quite enjoyable being able to share our experience in making the page with interviewers,” said Qiang. He also recognizes how closely the SAT can bring people of Asian heritage together simply through relatable content and personal experiences. “Once people realise that they’re not alone, they start to appreciate their culture a lot more, and I’ve personally received a lot of inboxes from people thanking the admin team for creating the page,” he said.

The entertainment and community of Subtle Asian Traits are hard to ignore and have touched the lives of many. Going forward, Qiang hopes that the group can continue to create and produce quality content and hints at possible new giveaways and events. For those who may not have known much about this group but are now mildly interested, do some research; chances are you may have found your new favorite Facebook page.