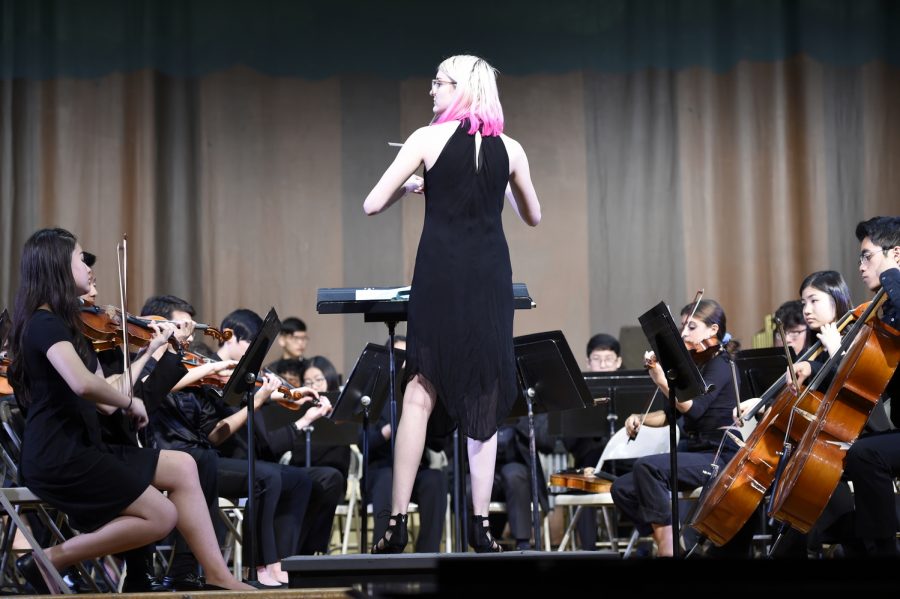 “I think of conducting as being the vessel through which the orchestra understands the music. To me, it just seemed like a more in-depth way to appreciate the music I had already devoted myself to,” said Amelia Krinke ‘23, who arranged and conducted a piece for the Orchestra.

The auditorium lights dimmed, and Jazz Band took to the stage. The spring concert began. A year of dedication by the instrumentalists showed clearly through pieces such as “Africa” by Toto, “I Can’t Help Falling in Love With You” by Elvis Presley, and a “Lion King” medley. The synchrony of violin bows, the pound of drums and the clarity of vocals enraptured the audience for two hours of professional-level music.

Having more time to prepare for the Spring Concert than the Winter Concert, each band performed a total of five pieces ranging from classical to Broadway. Concert Band and Orchestra were able to do medleys- combinations of many songs from the same movie or show. This year, they performed a Harry Potter medley (Orchestra) and a Lion King medley (Concert Band). “Lion King [was my favorite piece to play] because the horns have a prominent part in the piece, and it’s kind of a nostalgic piece. I feel like that piece has the most intricate rhythms and cool solos,” said Nathaniel Chin ‘19, a French Horn player in Concert Band. The piece are intricate, with different musical parts working together to create a beautiful song. The instruments compliment each other and in the concert flawlessly melded together by the instruction of Mr. Mantilla (Jazz Band and Concert Band) and Mr. DeSilva (Chorus and Orchestra). “[My favorite piece was] Jupiter because it gives fun parts to all first, second, and third trumpet,” said Samiul Hoque ‘20, a trumpet player in Orchestra.

This performance, however, was out of the ordinary. I was very surprised when Amelia Krinke ’23 replaced Mr. DeSilva for one song to conduct a piece that she had actually arranged for the orchestra. The piece was Jupiter, the Bringer of Jollity, the 4th movement of Gustav Holst’s suite called The Planets. Krinke had had some experience arranging and took only a week to write out parts for every instrument in Orchestra. Not only did she arrange the piece, but she conducted it as well. “I think of conducting as being the vessel through which the orchestra understands the music. It sounds a little corny, but the entire job of a conductor, really, is to interpret and convey the emotion of the music. To me, it just seemed like a more in-depth way to appreciate the music I had already devoted myself to,” said Amelia Krinke ’23. She will be continuing music through her next three years at Bronx Science and looks forward to trying out new material with Orchestra.

As this year is now over, the musicians had a chance to reflect on their experience this year in their respective bands. “I grew a lot in terms of being good at trumpet. My fundamentals like embouchure have been consolidated greatly because our difficult pieces force them to,” said Samiul Hoque ‘20, a trumpet player in Orchestra. Not only do the musicians improve their playing, but they also become closer with their fellow band members. “Jazz band is a very tight-knit group, and I really enjoy being a part of it,” said Leon Leveau ‘23, an alto saxophone player in Jazz Band.