Into The Woods and Out on the Stage 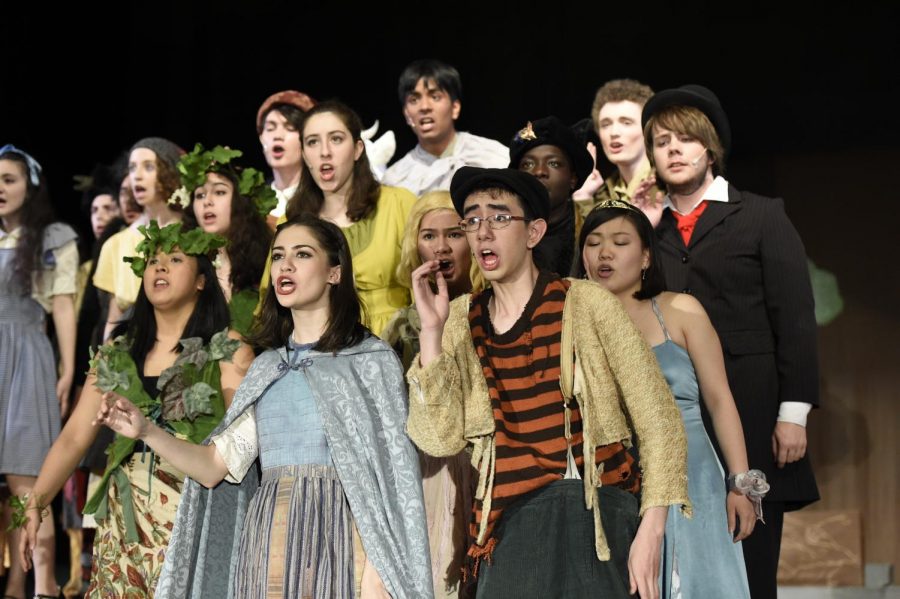 A last hurrah: The cast of 'Into the Woods' performs the finale during the final performance.

Once upon a time, there was a group of students, a theater troupe at a science school that put on the show of a lifetime. Into The Woods by Stephen Sondheim and James Lapine, featuring an amalgamation of our most beloved fairy tales. The show brings out a sense of nostalgia while also being completely novel and original, bringing together the stories we know and love.
“The costumes were amazing; they brought the whole show to life,” said Sofia Mahairas ’20.
You see students in full costume, dancing across the stage under the bright lights. You see the band, performing at full crescendo, setting the mood for the whole performance. What you don’t see is the Stage Managers, keeping the show running from backstage, making sure the constantly changing set got on and off stage smoothly. You don’t see the mass of people, bustling backstage, moving everything into position. You don’t see the costume changes (and repairs) happening during the show, low on time and space.

What happens on stage during a production is but a glimpse of the production as a whole. “We stay in rehearsals until 9 p.m.,” said Ava Vercesi ‘19, who has been a part of the Bronx Science Drama Department for seven shows (since her ninth grade year). Despite the long hours and the heavy workload from classes, the students all love being a part of the show. The students who do these productions are passionate about their craft, and it shows in the quality of their productions. “Of the many productions I have seen in the past eighteen years at Bronx Science, Into The Woods is definitely the best,” said Mr. Thorp, English teacher.

Although the time has come and passed to see the show, I hope that underclassmen reading this article decide to see our future performances, and maybe even take a shot at joining them, either onstage or backstage.