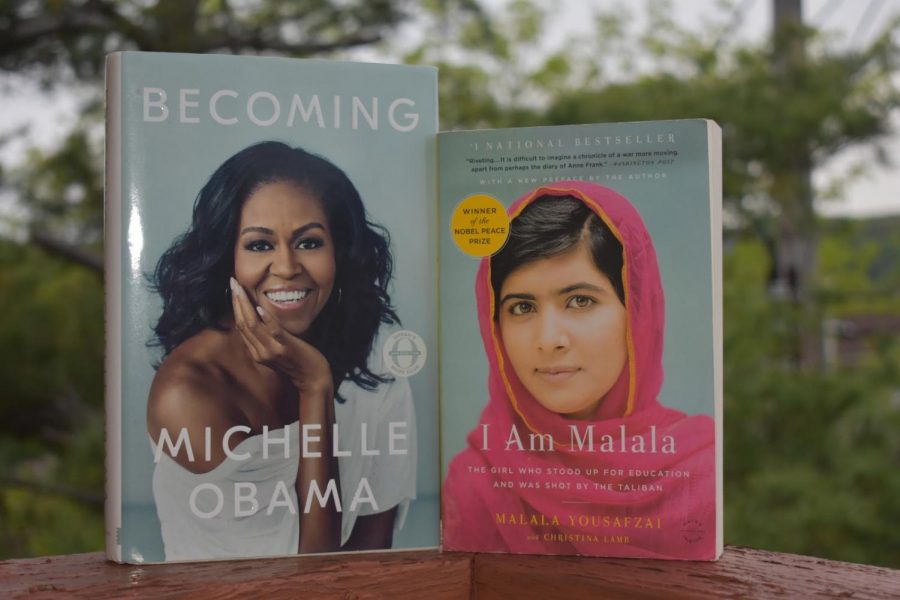 Becoming by Michelle Obama and I Am Malala: The Girl Who Stood Up for Education and Was Shot By the Taliban by Malala Yousafzai and Christina Lamb

2018 was a progressive year for women. Ireland voted to repeal one of the strictest abortion bans in history. Women in Saudi Arabia were legally permitted to drive. Canadian physicist Donna Strickland became the first woman in fifty-five years, and the third in history, to win the Nobel Prize in Physics. A record number of female legislators, including the first Muslim and Native American congresswomen, won seats in the United States House of Representatives in the midterm elections in November.

This year’s theme is “Think Equal, Build Smart, Innovate for Change.” In his statement about International Women’s Day, António Guterres, the UN Secretary, touches upon the importance of supporting women in power, closing the gender pay gap, and increasing the number of women in STEM. He writes, “Let’s make sure women and girls can shape the policies, services and infrastructure that impact all our lives. And let’s support women and girls who are breaking down barriers to create a better world for everyone.”

In addition to including International Women’s Day, March is National Women’s History Month, a time dedicated to recognizing and celebrating the achievements of women from all over the world.

In honor of Women’s History Month, here are some of the books written by powerful and influential women. Their words will inspire you to fight for the things you are passionate about, regardless of the obstacles you may face along the way.

First up, in the spirit of self-love and acceptance, we have Maya Angelou’s poetry collection Phenomenal Woman: Four Poems Celebrating Women. This collection, first published in 1995, features “Phenomenal Woman,” “Still I Rise,” “Our Grandmothers,” and “Weekend Glory,” all of which were published in Angelou’s previous collections of poetry. A “Renaissance woman,” Angelou was a poet, memoirist, civil rights activist, and singer, actress, director, and producer of television, plays, and movies. Although Angelou is most well-known for her autobiographies, which discuss aspects of her personal life and upbringing, her poetry includes some of the most iconic works of black and female empowerment ever written.

From the other side of the world, in Pakistan, we have Malala Yousafzai, a girls’ education activist and the youngest person ever to receive the Nobel Peace Prize. Her memoir, I am Malala: The Girl Who Stood Up for Education and Was Shot by the Taliban, was co-written with Christina Lamb and first published in 2013. Yousafzai’s voice shines through as she tells the story of her upbringing in a culture where women are less valued than men. The memoir recounts the rise and fall of the Tehrik-i-Taliban Pakistan in her home district of Swat and her activism within her village that resulted in an attempt on her life by the Taliban. Though written in the voice of a teenage girl, the humility of her character sparkles and makes her story and cause easy to follow. Yousafzai now studies philosophy, politics, and economics at Oxford University, and she continues to fight for access to education for girls through her charity, Malala Fund.
Their words will inspire you to fight for the things you are passionate about, regardless of the obstacles you may face along the way.
Finally, we have Michelle Obama’s best-selling memoir Becoming. Published in November of 2018, the book has, by the end of March, sold 10 million copies and become one of the best-selling books of 2019. Becoming is divided into three sections: Becoming Me, Becoming Us, and Becoming More. The first section tells of Obama’s life growing up on the South Side of Chicago, her education at Princeton University and Harvard Law School, and her early career at the law firm Sidley Austin where she met Barack Obama. Becoming Us follows the Obamas’ romantic relationship through their marriage and the beginning of Barack’s political career. Becoming More describes the first family’s years in the White House beginning in 2008 when Barack was first elected president.

Becoming is the stunning story of one of the world’s most dynamic and influential women. Throughout her career, Obama has fought for girls’ education with her Let Girls Learn initiative and tackled the epidemic of childhood obesity in the United States (the Let’s Move initiative in 2010 promotes healthy eating and physical education). One of the most powerful lines from the book, and one of my personal favorites, is “They were simply emboldened, floating on an ancient tide of superiority, buoyed by the fact that history had never told them anything different.” The quote identifies socioeconomic privilege at its core and embodies what Obama describes she spent much of her life and career trying to combat, a cause that means much to me because I come from a similar background.

Obama writes, “For every door that’s been opened to me, I’ve tried to open my door to others. And here is what I have to say, finally: Let’s invite one another in. Maybe then we can begin to fear less, to make fewer wrong assumptions, to let go of the biases and stereotypes that unnecessarily divide us.”

Regardless of each woman’s walk of life, they all used their voices to empower others. And that is what Women’s History Month is about: recognizing the efforts of women who came before us and striving to make life better for the future generations of women. Hopefully, these women’s stories will inspire you to continue their fight.