Making Memorable Melodies: A Review of the Winter Concert 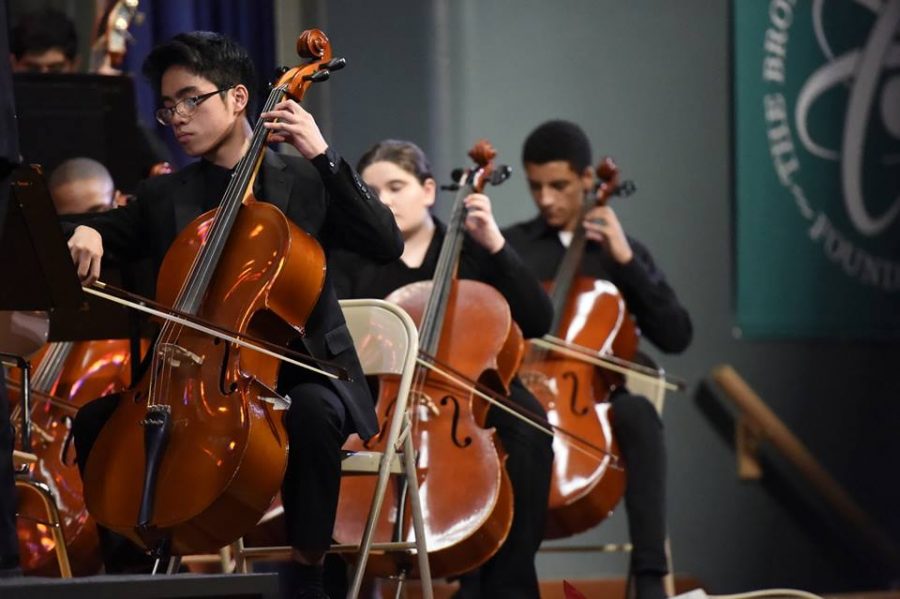 The lights dimmed, and the packed auditorium fell silent. Chorus took to the risers and the show began. For two hours, the couple hundred students that participate in music at Bronx Science transported the audience to Winter Wonderlands, Disney movies, and even Middle Earth. On December 12th and 13th of 2018, the annual Winter Concert highlighted the work of four ensembles in the Bronx Science auditorium: Chorus, Jazz Band, Orchestra, and Concert Band. Conducted by music teachers Mr. DeSilva and Mr. Mantilla, the four bands flawlessly executed songs from composers and artists such as Michael Jackson, Miles Davis, Beethoven, and more.

To be in the bands at Bronx Science, students must audition for a spot in June. The music program is open to all grades, including incoming ninth graders. Many students choose to take music at Bronx Science because they did it in middle school, or simply because they enjoy playing an instrument. “I enjoy playing violin and this was my first time playing with other students would would be older than me, so I thought I could learn more,” said Olivia Lee ’22.

The music programs here at Bronx Science give students opportunities to work with their peers, both older and younger, allowing everyone to learn from one another and adapt to a group ensemble rather than individual playing. “Orchestra is great because there are such big differences in the instruments we play, but when we come together to play, it sounds amazing,” said Angelina Almiroudis ’22.

When accepted into the ensembles, students automatically have that class in their schedule. Each class meets every day during a specific period. During those periods, the ensembles work together to learn and perfect anywhere from three to five pieces for their semi-annual concerts. But how long does it take to do that? “In general, about two to three months, but it depends on a number of factors, including the difficulty level of the piece, the technical ability of the class as a whole, the ability of students to focus during rehearsal and retain what they have learned, and the amount of time students dedicate to practicing outside of class,” said Mr. DeSilva, teacher and conductor for Chorus and Orchestra.
“The concerts were fantastic, and I will absolutely be going to the next one!”
Many students begin as ninth graders and take music throughout their four years of high school. It is during this time that they can develop as musicians and enjoy a period every day where they can take the time to just play music. “I like playing the flute, and it’s a nice break from the rest of school activities,” said Arsha Uthairungsri ’21.

Overall, the concert was a huge success for both the musicians and the audience. “I think the concert went very well. The whole band agreed that it was the best that we had ever played all five of the songs, and everyone had a lot of fun. The other music groups also sounded very professional and they also seemed to enjoy their concerts,” said Winston Tan ’21 of Jazz Band. Because of the hard work and dedication of all four ensembles, the Music Department put on two spectacular concerts in mid-December.

“The concerts were fantastic, and I will absolutely be going to the next one!” said Brooke Augustine ‘19.