A Holiday Express to the Past 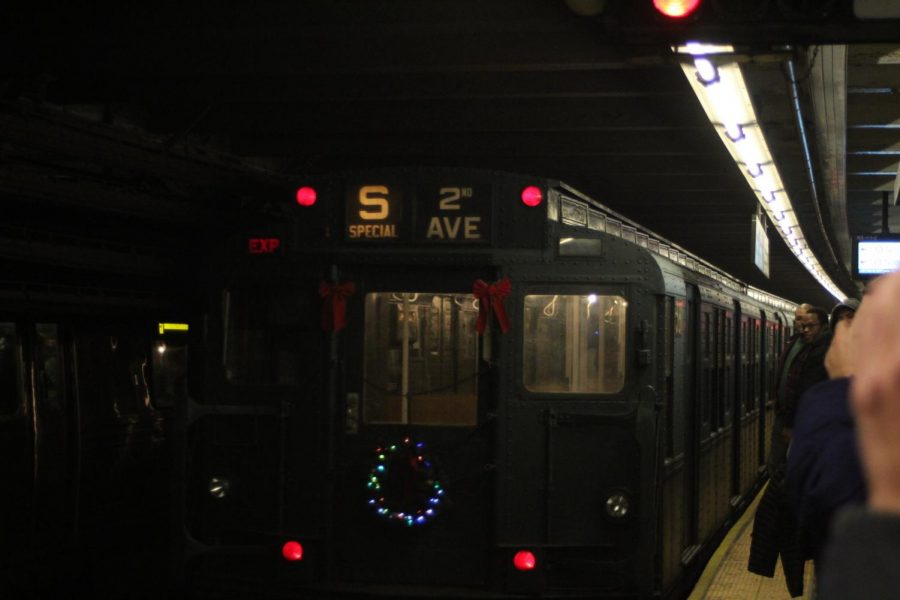 Passengers wait eagerly by the platform as the Holiday Train pulls into the station.

Besides the better known holiday traditions in New York, such as watching the annual lighting of the Rockefeller Christmas Tree or strolling through the busy stalls of Bryant Park’s Winter Village, there is also a more hidden, yet just as festive exhibit—taking a ride on one of the MTA’s Holiday Nostalgia Rides.

These trains run throughout the month of December on the F line uptown from 2nd Avenue, and on the A/C/D line downtown from 125th Street.Here’s what to expect if you do get the chance to hop aboard one of these special subway cars for a holiday excursion.

You’ll first notice while these special trains are approaching the station that they have an older and distinctly classic style. Rather than the metal gray color we are accustomed to seeing on modern subway trains, they are painted a dark green color, going along with the holiday theme. Unlike regular train cars, the Nostalgia Rides do not bear a letter nor a number at their fronts, and instead, are decorated with a wreaths and ribbons at their heads and tails.
“I’m a sucker for classics, so being able to ride vintage old school trains is so delightful. It’s nice to have the opportunity to experience the past during simpler times,” said Alvaro Taveras ’19.
Just like on the platform before boarding, the inside is packed with subway riders, some even dressed in the time period of train car itself. Some passengers choose to don simple bowler and feather hats, while others go all out and could easily be mistaken as guests taken straight out of one of Jay Gatsby’s elaborate parties, as they are decked out in old-fashioned coats and intricate necklaces. Group sizes range from children and their parents to whole groups of friends, all just wanting to get a taste of how transportation was like in the 1930’s. As the train finally pulls into the station, people quickly scurry to the front of the crowd to pose with the old-fashioned locomotive.

When walking inside the train cart, you’ll notice a few changes from the modern subway cars. Scattered across the walls are old-fashioned posters from the 1930’s—ranging from U.S. post office advertisements to architectural sketches of the train. In addition, ceiling fans hang from overhead, and there are a smaller abundance of seats, which are now covered in a thick cushioning. And rather the subway cars being separated, passengers could walk freely throughout the train.

“I’m a sucker for classics, so being able to ride vintage old school trains is so delightful. It’s nice to have the opportunity to experience the past during simpler times,” said Alvaro Taveras ’19.

Of course, there are still many similarities between the subway trains of today and these ancestors. Both have the purpose of getting people from place to place, both as smoothly and quickly as possible. “I was actually surprised at the speed the train was going. The subway ride was faster than any I’ve ever been on before, and we got to 125th Street from 2nd Avenue in almost no time!” said Moitrayee Dasgupta ’19.

And of course, like their modern relatives, the vintage Nostalgia Rides are packed with passengers. They range in age, gender, and ethnic backgrounds, still representing the diversity of New York City, as they all clutch the metal hand grips from above, or press against one of the trains’ unique cushioned seats. But rather than just traveling to a destination, passengers are able to admire the unique atmosphere that the Nostalgia Rides create. While the train zooms to the next stop, smiles are on the face of every person as they soak up the ambience, furthered by holiday spirit in the air.

For just the swipe of a MetroCard, being able to navigate through the subway system and ride the vintage trains as people did nearly ninety years ago is a worthwhile experience. Enjoy the ride!