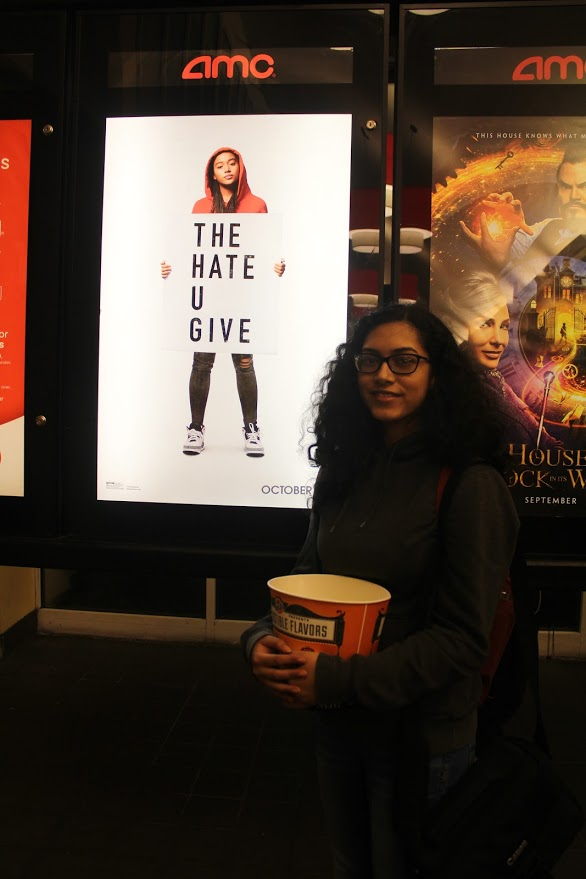 Tasnia Chowdhury '19 stands in front of The Hate U Give poster at AMC Theatres after watching the movie.

“It’s THUGLIFE. The Hate U Give Little Infants… Fs Everybody.” In the opening scenes, Starr Carter introduces her life to the audience, and explains that she was only nine years old her dad gave her siblings and her “the talk.” Unlike “the talk” that most kids are familiar with, Starr’s dad shows them what to do during a confrontation with the police. In these first few scenes, the audience gets a taste of what it means to be black in America.

As we follow 16-year-old Starr through high school, we become acquainted with  both sides of the main character. Starr from Garden Heights, a low-income black neighborhood, and Starr who attends the predominantly white private school Williamson Prep. At school, Starr is well-mannered, and never curses or uses slang, even though all the other kids do. After all, she does not want to be known as the “ghetto girl.” In Garden Heights, Starr does not fit in with her neighborhood friends, who wear flashier clothing and enjoy underage drinking. They make fun of Starr for going to Williamson.

One night, at a party in Garden Heights, an ostracized Starr was driven home by her childhood friend Khalil. However, on the way there, the two got pulled over by the police. Starr remembered the advice her dad had given her during “the talk” and told Khalil to put his hands in front of him and do as the officer said. Khalil suddenly got shot by the white police officer, who thought he had reached for a gun when it was just a hairbrush. Since then, Starr struggles to find her voice among those who tell her to keep quiet  about the shooting, and those who tell her to fight for what’s right and put her life in danger.

Actress Amandla Stenberg, known for her role as Rue in ‘Hunger Games,’ plays Starr Carter in “The Hate U Give.”is originally based off of the book ‘The Hate You Give,’ by Angie Thomas. Before  the movie was released, there was controversy over Stenberg playing the role of Starr. This controversy stemmed from the fact that, in the book, Starr was a dark-skinned black girl, and Stenberg does not match that physical image. For this reason, many were wary of the movie at first, but the plot and execution of the roles surpassed the flaws.

Actor KJ Apa (most known for his role as Archie Andrews in ‘Riverdale’) was praised for his  role as Chris, Starr’s white boyfriend who tried his best to help her as she gained the courage to stand up for her own beliefs — even if it meant letting go of her friend Hailey (Sabrina Carpenter), who supported racial stereotypes. Overall, the actors and actresses did a fantastic job performing their roles, especially Russell Hornsby, who took the role of Starr’s dad in the movie. Through his humorous tone and empowering words, Hornsby not only inspired Starr and her brother, Seven, but also the audience.