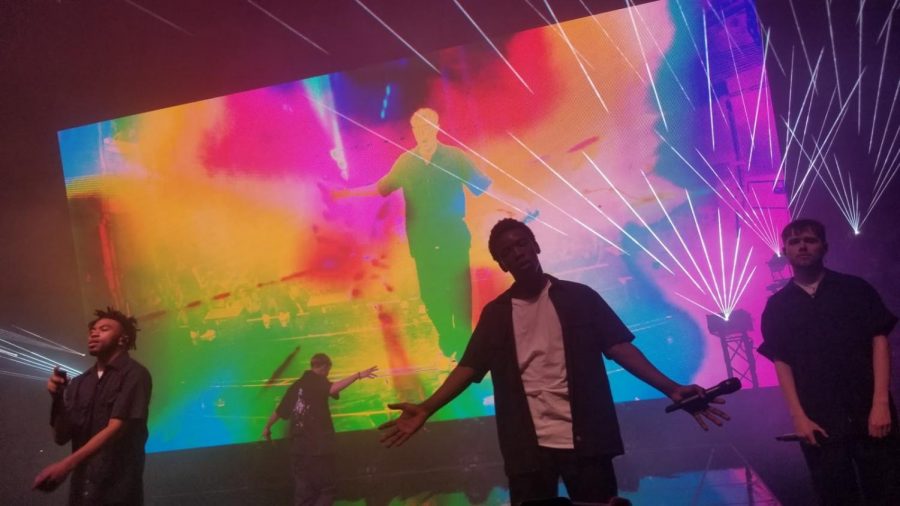 Brockhampton’s New York City show on their “I’ll be there tour.”

Brockhampton has had a rough time since their last album, Saturation III, which released in 2017. Founding member and face of the band Ameer Vann left after allegations of abuse surfaced. Iridescence is the first album they have released since the allegations. After Ameer’s sudden departure, fans wondered if the band would last. Others questioned whether Brockhampton would be able to produce anything like the saturation trilogy, their sophomore effort that was widely considered to be some of the best rap albums of the 2010s. Iridescence puts those anxieties to rest and restores hope in the future of the band.

The band’s six vocalists and nine producers find strength in the variety of voices and styles that they each bring, and Iridescence is no exception. More than ever, the production is bold in its execution: hardstyle drums rattle over the most aggressive tracks, and thumping bass complements the most explosive moments of the album. Joba’s verse on “J’OUVERT” burns with a caustic rage, and Merlyn’s verse on “NEW ORLEANS,” cloaked in the spiritual and religious swagger that has become a staple of modern hip-hop, are some of the many stand-out moments of Brockhampton’s trademark pulse-pounding, irreverent energy.
Iridescence puts those anxieties to rest and restores hope in the future of the band.
But this isn’t where a bulk of the boldness lies; it’s trodden ground for Brockhampton. The fearlessness of the band stands out when the energy fades away and is replaced by moments of genuine vulnerability and introspection. Pieces have already been written on Kevin Abstract’s verse on “WEIGHT,” the song that serves as the emotional core of which the rest of the album is built around. It muses on his insecurity about his place within the boyband and his history of struggling with his sexuality. Less has been written on Merlyn’s exceptional verse on “TONYA,” who says in the shadow of Ameer’s fall, “I just need a chance to move past my past/Don’t think too fast/Private jets still crash.” These moments where the walls are down are marked by either soft pianos, a chorus, or a swelling orchestra. They offer the genuine reflection and self-awareness that has defined many great rap artists, done with the rough-and-tumble, 21st-century boy band style that has come to define Brockhampton.

Fans were struck with the possibility that their new album wouldn’t match the saturation trilogy. How could it live up to the three albums that spawned Brockhampton’s iridescent rise to fame? After musing on it for a good while, it does and it doesn’t. It won’t be more well liked than anyone’s favorite Saturation album or more hated than anyone’s least favorite Saturation album, but Iridescence is worth more than just its face value; its importance comes from what it represents for the future of the band. Iridescence is a turning of a new leaf, a fresh start, a new home, and a new label for Brockhampton. The fact that the band survived such a catastrophic loss in itself is a testament to their desire to create. Iridescence is their survival song. It confronts the collapse and turmoil of the “longest summer in America” in a way that is necessary for growth. The album is a fresh start, and I can’t think of a better foot to start on.

Iridescence is a departure that represents a natural evolution of Brockhampton that doesn’t manage to lose anything in their dramatic shift. The flows and rhymes are still of the immense quality and character that is typical of their previous work. A new era of Brockhampton is here, and if they can grow from this album, we all have a reason to be very excited.