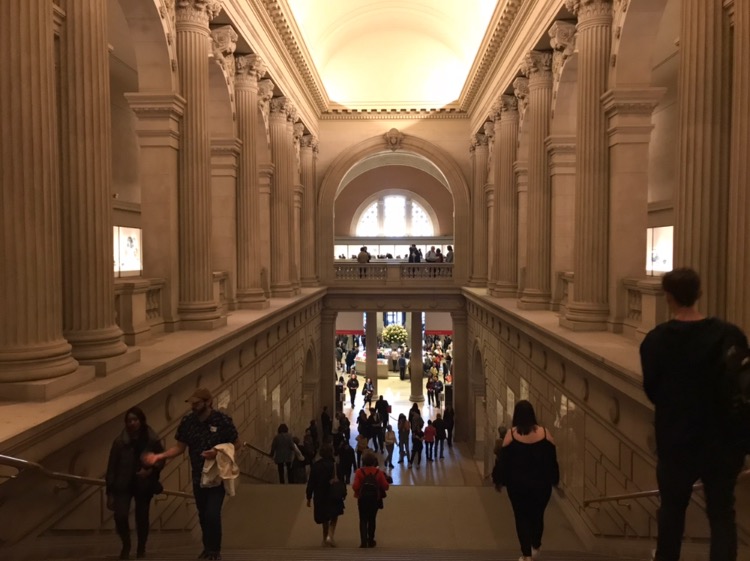 The MET’s front hall, bustling with people on a Friday afternoon.

If you want to learn and appreciate the history in which mankind’s foundation was built upon, you should visit an art museum.

Two of the most famous museums that typically come to mind are The Metropolitan Museum of Art in New York City and The Louvre Museum in Paris. Both museums generate millions of visitors each year with their famous galleries and exhibits, and their status, fame, and significance is undisputed.

An art museum is an archive of history, a display of first person perspectives on an specific time period. The artists’ translations of certain events, certain people, and certain feelings are depicted within their art. In essence, an artist’s art is their life.

The Met and the Louvre have decided to collaborate to produce a special dedication exhibit to one of the greatest leading figures of the French Romanticism movement, Ferdinand Victor Eugene Delacroix.

Born in 1798, Eugene Delacroix, gathered a great interest for the arts at a young age. With the encouraging support from his family members, he withdrew attendance from the elite secondary school Lycee Louis-le-Grand in Paris to pursue art instead.

In seeking to further develop his art, Delacroix first turned to a painter well-known for his paintings of the Neoclassicism and Romanticism periods, Pierre Narcisse Guerin. He then turned to further pursue his artistic studies at the Ecole des Beaux-Arts in 1816, one of most famous and influential art schools in France.
“He’s a prolific artist.”
With his gathered experience, Delacroix first demonstrated his ‘genius’ at the young age of twenty-four. He gained massive public recognition with his literature-inspired piece, “Dante and Virgil in Hell,” which was featured at the renowned Paris Salon.

Delacroix became well-acclaimed for his dramatic and emotional depictions of people and events involved in his life. A famous example would be the 1830 painting of Liberty Leading the People, which is in reference to La Revolution de Juillet, or the July Revolution.

Although some may say paintings with themes centralized around dramatic, emotional portrayals were common of the Romanticism period, Delacroix made himself unique through his style of distinct, detailed brushwork. In order to truly appreciate his work, a visit to the Trisch Galleries exhibition itself is essential.

The buzzing lines at security coupled with the immense maze that is the Met can make the trip to the Delacroix rather hectic. However, the exhibit is well worth the slight wait. Delacroix is truly a master at his work. As Ms. Julie, from the class of ’77 said, “He’s a prolific artist.”

This exhibit, the first-ever North American retrospective on Delacroix, would truly be a shame to miss. The Trisch Galleries displays over 150 pieces of his works, including his earlier sketches, manuscripts, and various other famed paintings. Thousands of admirers, residents and tourists alike, have already flocked to visit the exhibit. Mr. Tianzhu Z, a visitor from France has visited the Louvre Museum previously and highly praises and recommends this exhibit. “Delacroix was a master within his period.”

The exhibition will continue until January 6th, 2019. There is no excuse to miss this opportunity of a lifetime, after all, admission for all New York residents is completely free.