Opinions on Kanye West and His Upcoming Album ‘Yandhi’ 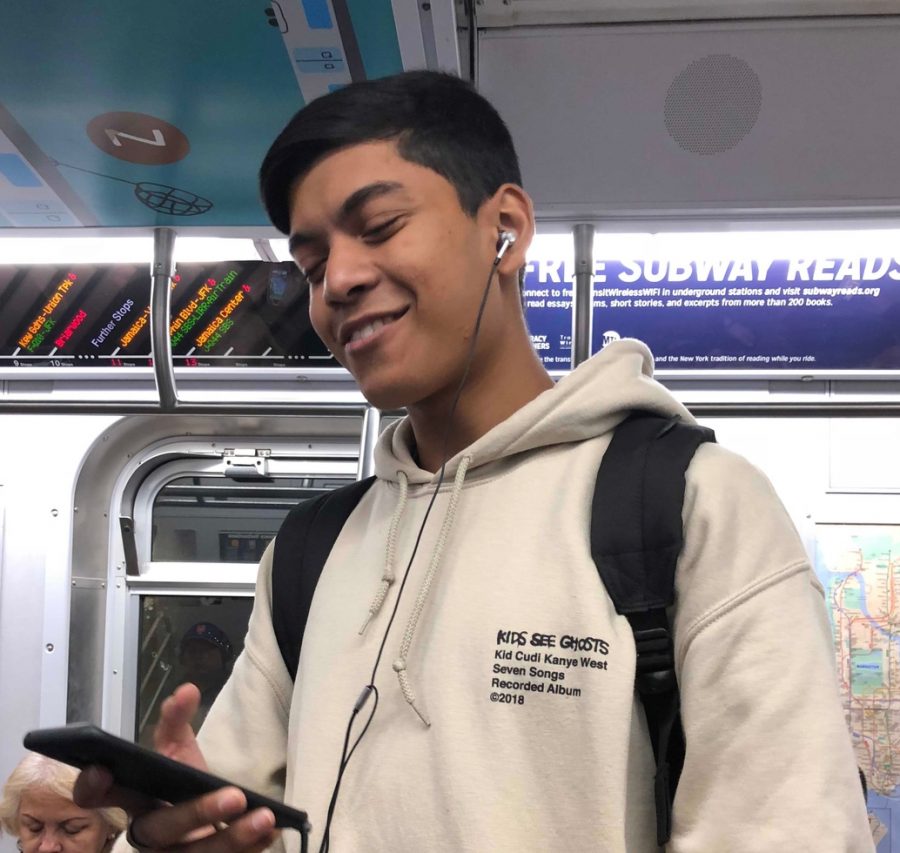 Semanto Khan ‘20, a student from Stuyvesant High School, stays updated on the news surrounding Kanye as he scrolls through his Instagram feed. His hoodie is one of the many Kanye pieces that he owns.

After announcing the release of his ninth studio album, and his second this year,  Kanye West has been diligent in fulfilling his promise on Twitter to release “Three albums a year.” He initially gave his word to fans that the album would be released on September 29th, 2018, the Saturday that he was featured on SNL; but to the disappointment of fans, Mr. West postponed the release of Yandhi. There was a rather wonderful performance with fellow artist Teyana Taylor in which they performed a sneak peak of We Got Love, a song supposedly included in Yandhi.

The following Monday, Mr. West met with TMZ’s Harvey Levin and explained that he delayed the release of the album because he needed to go to “what is known as Africa.” The forty-one year old went on to say that a visit to the continent was necessary in order to incorporate “the vibe.” In fact, a video had recently surfaced portraying Kanye dancing to African beats in a makeshift studio placed in the African savanna, showing that Kanye quite literally meant what he said.
“Kanye has been really active in the community and in politics, so I’m really excited to see how he translates his optimism into Yandhi.”
Kim Kardashian West, the rapper’s renowned spouse, took to Twitter to inform fans that they have nothing to worry about. She even provided a new release date, November 27th, 2018. Fueling the anticipation, Kim emphasizes to fans that they should “TRUST” her, as “it is worth the wait.” With news of the album’s updated release date, people were still left doubtful. Johnson Wong ’20, a student at Brooklyn Technical High School, when asked whether he thought the album would be released, shook his head and said, “I don’t think so. I still listen to some of his old songs in the meanwhile. No matter what he puts in the album, not even the vibes from Africa can save it. He will never be the same quality artist that he was back in 2008.”

Wong is a big fan of hyped up street-wear. He is also a ‘re-seller,’ meaning that he purchases limited and sought out items for retail, then re-sells them for a higher market value. In the past, Johnson has bought a plethora of Yeezy Boosts, the shoes that Kanye designs with the juggernaut company Adidas. Recently, Johnson has been less involved with Yeezy boosts, which may correlate to his lesser love for the rapper. “I’m just not feeling them anymore,” Wong said. He still tries to buy the rapper’s shoes for retail, but he has moved on to other shoes, such as those in the Off-white Nike collection The Ten as well as Pharrell Williams’ own line with Adidas: Hu. Ayman Haque ‘20 feels strongly about these shoes, similar to Wong’s sentiments, “It’s silly that people only buy things because they are associated with Kanye, because everyone else is wearing his stuff. I enjoyed the creativity in people’s wardrobes, and he’s ruined that,” Haque said.

Many people would agree with Johnson Wong, that Kanye West has changed for the worst since 2010, both as an artist and as a person. After his recent White House visit, fans could see how supportive of President Trump Kanye has become. Kanye West has been scrutinized by many, being told to stick to music or to stop sporting his signature red MAGA hat that he solemnly embraces. Julian Ramcharan ’20 said, “He’s a lyrical genius, but his recent actions have really made his past works of advocating for the minority community somewhat invalid.”

Despite these critical views that students have regarding Kanye, some students have remained indifferent to the whole ordeal. Anthony Pak ‘20 of QHSS adds “I don’t really dislike him. His comments have been controversial lately, but I still have respect for the artist. He is insanely successful. He was able to successfully boost the shoe culture to something that it never was beforehand. Yeezys were the pinnacle of street wear.” Pak alludes to the prior success of the shoe, implying the steady decline of the interest in Yeezy boosts.

Die hard fans seem rather passionate and supportive of Kanye’s upcoming work. Semanto Khan ‘20, a student from Stuyvesant High School, is a long time fan of Kanye and his associates, such as Travis Scott and Kid Cudi. “Kanye has been really active in the community and in politics, so I’m really excited to see how he translates his optimism into Yandhi. It is also important to note that Kanye’s discography and political opinion should be interpreted separately.”

Kanye West will always be an inspiration to some, and more importantly, a symbol of culture to many. His work and passions will always gravitate him towards the center of modern culture, and he will live forever in the hearts of our generation.