Curtain’s Up! The Drama Department Presents ‘Letters To Sala’ by Arlene Hutton 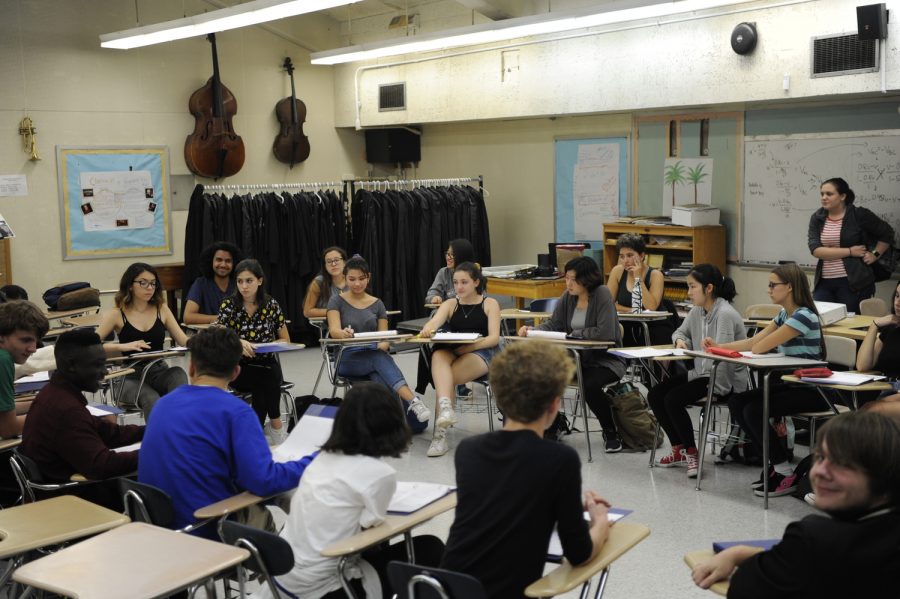 With new leadership has come new style, as Ms. Steiker takes over the Drama Department, she brings with her new structure, professional techniques, and a heart wrenching play that drastically differs from the productions of the past.

‘Letters to Sala’ by Arlene Hutton tells a story of hardship and the valor in face of adversity. The play takes place in labor camps during the Holocaust and is based on letters sent to Sala Kirschner. Kirschner had long kept her family in the dark about her past, only revealing her difficult history to her daughter in her old age. The story of her life in New York with her family and her story in the labor camps will be juxtaposed onstage, with the events playing out concurrently.
“I would hope that seeing the play would motivate students to come and see the collection,” said Ms. MacEnulty.
Previously, the Drama Department’s shows typically veered towards comedies and murder mysteries, featuring works by playwrights such as Agatha Christie, Oscar Wilde, and Joseph Kesselring. Hutton’s piece, however, is a major departure from this theme. The story of the horrific experiences that Sala underwent brings with it a much more solemn and serious tone which must be handled delicately.

The story is told through letters saved by Sala during her time in labor camps. Bronx Science’s very own Holocaust Museum highlights the importance of primary documents, and how they can be a window into the past even decades after the fact. “I would hope that seeing the play would motivate students to come and see the collection,” said Ms. MacEnulty, who teaches the Holocaust Leadership course. She believes that the play will be an opportunity for students to learn about the Holocaust, its effects on families, and the use of primary documents in the telling of this story.

This March, Sala Kirschner had passed away in her home in Manhattan, and this performance, with the blessing of her daughter Ann, will serve as a tribute to her memory, as well as to the memory of Sidney Kirshner, Sala’s husband who passed away in October 2018. The family has a special connection to the school, as Ann’s husband is an alum, and they have expressed their gratitude to the school for keeping the story alive. Ann herself, along with the playwright, will be coming to see the performance put on by our school.

Under the tutelage of Ms. Steiker, the cast and crew are working hard to produce a show far removed from the status quo. Steiker, who is running the Fall Play following the retirement of Mr. Brown, is placing an emphasis on team building exercises for the cast. In strengthening the bond between the actors, she believes that their acting will improve and appear more natural on stage.

Stage Crew is working hard as well. ‘Letters to Sala’ features multiple concurrent scenes, and as such will have a minimalist set with more emphasis on costumes, props, and lighting used to differentiate time periods in such a dynamic show. A sharp turn from the more static sets of previous shows, ‘Letters to Sala’ presents an interesting challenge for Stage Crew.