The Comic Film Craze of the 21st Century 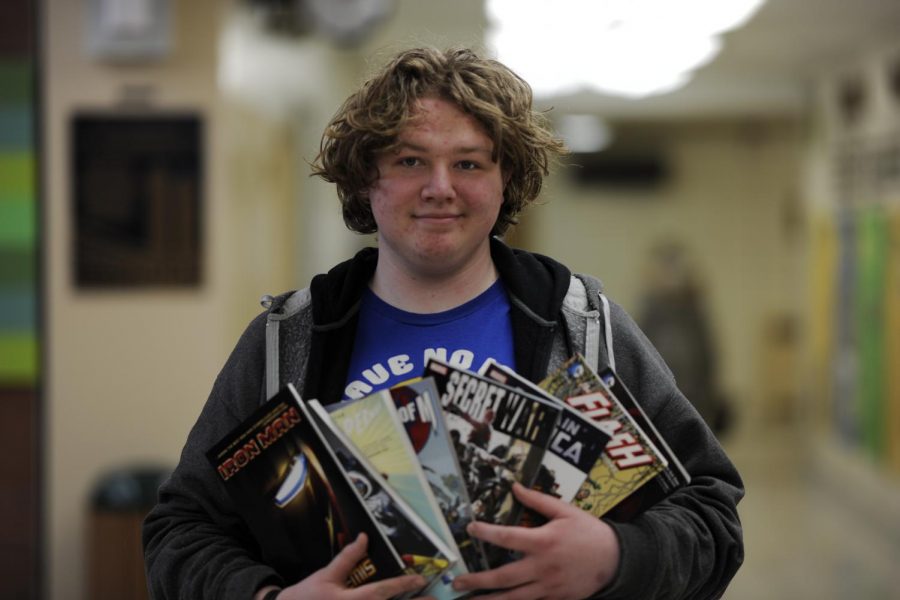 Gearod Murphy '19 with a slew of Marvel and DC superhero comics, including The Flash, Iron Man, Captain America, and The Avengers.

‘Avengers: Infinity War’ is the nineteenth film in the Marvel Cinematic Universe film series, and comes out on the tenth anniversary of the first film in the series, Iron Man. Since 2008, and more so since the dawn of the 21st century, the superhero genre has dominated the box office, television screens, and minds of the country and world. But how did this happen?

One can trace the influence of superheroes in the mainstream media back to the 1978 premiere of ‘Superman: The Movie’ with Christopher Reeves, or 1989’s ‘Batman’ with Michael Keaton and Jack Nicholson, but the more modern influence of the comic book to film medium started most recently in the year 2000, with the films ‘X-Men’ and ‘Unbreakable.’

Premiering on July 14, 2000, ‘X-Men’ delivered the first chapter in the titular X-Men film franchise, telling the tale of Patrick Stewart’s Charles Xavier and his team of ‘mutants,’ who were super powered individuals feared and hated by the general public in a parallel to racism and antisemitism. The team, led by Stewart and Hugh Jackman’s Wolverine, faced off against extremist mutants called the brotherhood, led by Ian McKellen’s Holocaust survivor character Erik Lehnsherr, or Magneto. The film was positively received by audiences and hailed as one of the best superhero films of all time.

Meanwhile, fresh off his smash hit ‘The Sixth Sense,’ writer/director M. Night Shyamalan released the film ‘Unbreakable’ on November 22, 2000, to positive yet confused critical acclaim. ‘Unbreakable’ told the story of Bruce Willis’ security guard David Dunn, who survived a horrendous train wreck without a single scratch on him. Dunn is then approached by Samuel L. Jackson’s Elijah Price, who believes that Dunn may in fact have superpowers and not even know it. The film was quietly received at the time, but in years since has gained a following with fans, even receiving a 2016 thematic sequel entitled ‘Split,’ and the upcoming 2019 third installment, ‘Glass.’

With these two films testing the stage for superhero approval, superhero films began to come out slowly but surely, with 2005’s ‘Batman Begins,’ and of course the Sam Raimi ‘Spider-Man’ Trilogy (2002, 2004, and 2007). ‘Spider-Man’ (2002) was a large stepping stone in the superhero and american culture, releasing only months after the devastating World Trade Center attacks on 9/11, with its impact felt everywhere. Who can forget the iconic image that was released so soon after the attacks, where in the trailer Spider-Man posed in front of the American flag? Everytime I see the iconic bridge rescue scene, I tear up. “Hey! Pickin’ on a guy tryin’ to save some kids! This is New York! You mess with one of us, you mess with all of us!”
Needless to say, the superhero culture provided a much needed escape from the world issues of the time, but also promoted the proud sense of unity that prevailed after the World Trade Center attacks.
The eventual start to the MCU, 2008’s ‘Iron Man’ continued this trend of superhero culture invading that of the American conscious. Telling the tale of former War Profiteer Tony Stark, who was captured by terrorists during one of his weapon testings, Tony created a suit of armor to save his life and used it to fight against those who sought to destroy him. However, while ‘Iron Man’ was incredibly well received, earning a rating of 94% on ‘Rotten Tomatoes,’ it was not until the ending of 2008’s ‘The Incredible Hulk’ that the current MCU phenomenon fully started. In the ending of ‘Iron Man,’ the seeds were planted with Nick Fury’s appearance to create the iconic super-team the ‘Avengers,’ and in the ending of ‘The Incredible Hulk,’ it was revealed that the two films took place in the same universe, leading to the unification of the Avengers.

Suddenly, superheroes were more popular than ever, spawning films like ‘The Dark Knight’ (2008), and the smash hit ‘The Avengers’ (2012). The phenomenon even spread to the small screen, with the television series Arrow premiering in 2012 on the CW Network. The show gained traction with fans, and in the second season a spin-off was hinted at, and ‘The Flash’ ran onto screens in 2014, whose light hearted but serious emotions made it a fan favorite.

Currently, the “Arrowverse” has four live action television shows, including ‘Supergirl’ and ‘Legends of Tomorrow,’ and animated spin-offs on the DC Seed app like ‘Vixen,’ ‘The Ray,’ and the soon to premiere ‘Constantine’ relaunch.

Comic books have invaded the mainstream media, and hopefully they are here to stay.