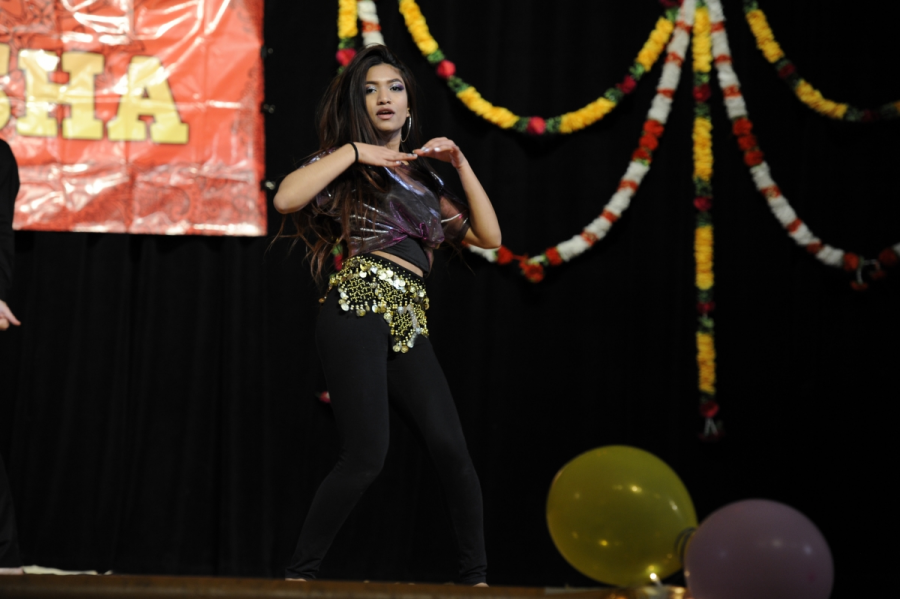 Anika Lamia ’18, the secretary of NASHA of Culture Club, performs her carefully choreographed dance during the show.

Flashing lights, intricate dances, and speakers pumping out Bollywood tunes laced made it a night to remember. Bronx Science held its yearly NASHA of Culture Performance on April 20th, 2918 in the auditorium. Each performance showcased students’ talents ranging from Bollywood dancing, to bhangra, to remixes of music involving multiple different languages.

Uma Balachandra ’18 and Swara Kalva ’18 hyped up the packed auditorium with a traditional Indian dance ritual. Both were able to balance jugs of water on their heads, while dancing and standing on a tilting plate. The way they appeared to defy the laws of gravity left the audience in awe.

“Although there were some performances that could have been better, overall, I was amazed once again. When Uma and Swara did the dance on the plates, I actually screamed, because I was astounded that they were able to pull off such a dance with big smiles on their faces. The show was great, and it’s nice to see my friends’ hard work on stage,” said Sanweda Mahagabin ’18.

Thahiya Hassan ’22, a member of freshman group ‘The DownTown Browns’ said, “The day of the NASHA Show was undoubtedly one of the best days I’ve ever had in high school so far, but it didn’t come without extreme nervousness about performing in front of so many people.”

In addition to the students and guests who came to enjoy the show, the members of the NASHA Club board were very pleased with the event. Nitin Vanama ’18, the President of the NASHA Club, said, “NASHA has been a major part of my high school experience. As the responsibilities piled on, I went from worrying only about my performance freshman year to more than forty performances senior year. Alongside that, every small aspect mattered, from the audio, to the lighting, decorations, and emcees. I had an amazing board helping out both years, and I couldn’t have pulled it off without them.”
“Although we go through weeks of stress with rehearsals, coordinating with our performances on stage and the school administration, it all becomes worth it when you’re standing on stage at the end looking at all the performers and people who came to watch and support you,” said Nitin Vanama ’18, the President of the NASHA Club.
Although the process from the beginning of the year to the end may have had a few bumps along the way, this year’s performances turned out to be a hit.

“NASHA is the one thing I’ve dedicated myself to continuously, and after all the stress of organizing the show and running around trying to decorate and get everything ready, it’s kind of euphoric finally seeing it play out in front of my eyes,” said Anika Lamia ’18, secretary of NASHA. Through both the board members’ and the audience’s eyes, the NASHA of Culture Assembly serves as an instrumental part of the Bronx Science community. The students who perform put in dozens of hours of hard work and enormous dedication, trying their best to provide a show worthy of the standing ovation received at the end of each performance.

“Although we go through weeks of stress with rehearsals, coordinating with our performances on stage and the school administration, it all becomes worth it when you’re standing on stage at the end looking at all the performers and people who came to watch and support you,” Vanama said.