Doctor Manhattan or: How I Learned to Stop Worrying and Love The Pancakes

A review of long awaited first issue of 'Doomsday Clock,' the both direct and indirect sequel to the 1986-87 maxiseries Watchmen. 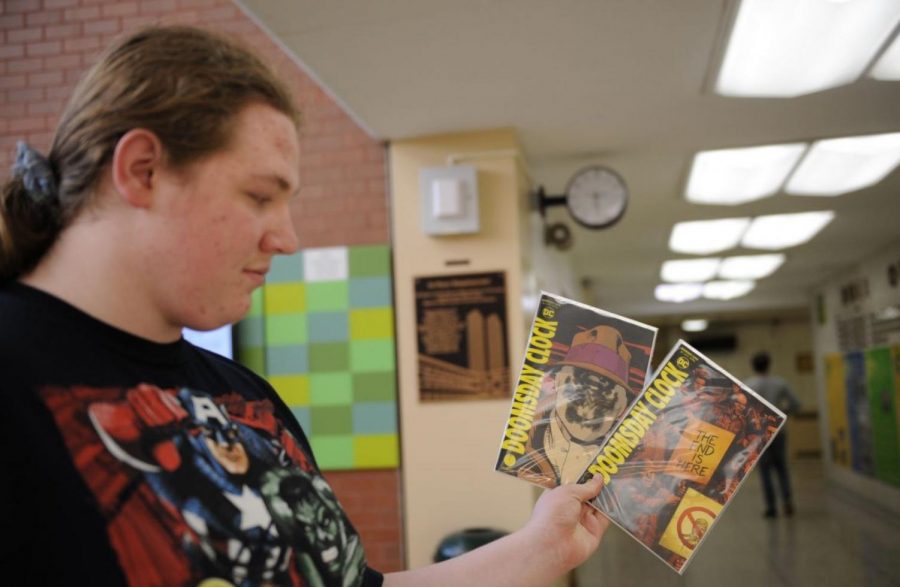 On the morning of November 14, 2017, several comic book reviewers, writers, and artists awoke to find a package waiting for them, a package of “Morning Joe’s” pancake mix shipped with syrup and a comic book.

While the pancakes were a welcome surprise, the issue packaged with the mix was the real treat: the long awaited first issue of Doomsday Clock, the both direct and indirect sequel to the 1986-87 maxiseries Watchmen, which Time Magazine has declared as one of the top 100 English language novels of all time, as well the top graphic novel.

Ever since it was first hinted at in 2016, comic fans everywhere have been clamoring for hints on this epic sequel, written by Geoff Johns and drawn by Gary Frank. Confirmed in May 2017, everyone has been on the edge of their seats to see Johns and Frank’s latest collaboration. They are a #1 New York Times bestselling team known for their quality work such as ‘Batman: Earth One’ and ‘Superman: Secret Origin.’

The first Issue was released November 22, 2017, a date familiar to Watchmen readers as the birthday of Doctor Manhattan. However, select retailers released the comic according to DC’s instructions at 11:57 p.m. the night before, a representation of where the doomsday clock is currently at before midnight.

I went to my local comic shop, bought a copy of the first issue for five dollars, and read it meticulously. I was not disappointed. The first issue is sent to reclaim that classic feel of the first issue of Watchmen, but still reinvigorate the series. This is clear from the first page of the book, whose panel format and cinematography of a camera zooming out from a single image mirror the first issue remarkably, save for one change.

That change was the fact that the last panel snaps back to the ground view instead of a bird’s eye, which Johns has publicly stated is an allegory to the world of the comic currently being “without god,” i.e. the character Doctor Manhattan, a character in the original with so many godlike abilities that he cannot relate to normal humans anymore. The book reveals that after the events of the first installment, Manhattan left the Earth in search of new life. However, now that the news of the climax of the original series being staged comes out, all hell breaks loose without him on Earth.
The returning Rorschach and Ozymandias, are searching for Dr. Manhattan so that he can reinstate peace in a broken world, and the final scene suggests their search will take them to a world beyond their wildest imagination.
This is further shown through the state of the current fictional world, where the series takes place in the four hours before nuclear devastation from the Russians invading Poland. However, it is still mysterious in the details, as the series shows how all American news networks are replaced by a singular network run by William F. Buckley Jr, who denies the claims from foreign media saying the Russians have stopped their invasion, calling them fake news.

The main characters of the series, the returning Rorschach and Ozymandias, are searching for Dr. Manhattan so that he can reinstate peace in a broken world, and the final scene suggests their search will take them to a world beyond their wildest imagination. This world is revealed to be the main DC Universe, as a reveal of Clark Kent, Superman himself in the last pages shows him having what seems to be his first ever nightmare, of his adopted parents’ deaths.

This is further supported by the lead up to doomsday clock, where in the DC Universe Rebirth Special Batman finds the Comedian’s pin buried in the batcave, followed by a segment on Mars, where the classic Doctor Manhattan scene from Watchmen plays out in quotes, and especially in the crossover between Batman and the Flash: The Button, where in the end Doctor Manhattan’s hand retrieves the smiley pin as the first confirmation ad for Doomsday clock ends the crossover.

Advertisements have since have portrayed Superman next to Doctor Manhattan, Batman with Rorschach’s journal, Ozymandias’s hand on Lex Luthor’s shoulder, Rorschach walking away from an explosion, and the Joker putting on makeup and looking in a Nostalgia Hand Mirror, Nostalgia being character Adrian Veidt’s fashion company.

The first issue has exceeded expectations, acting as the “Force Awakens” of the series, in that it shows the new creative team can hold up to the classic. Whether you agree or not with the idea of a sequel to the classic “Watchmen,” this is an incredible read with a promise of more to come.