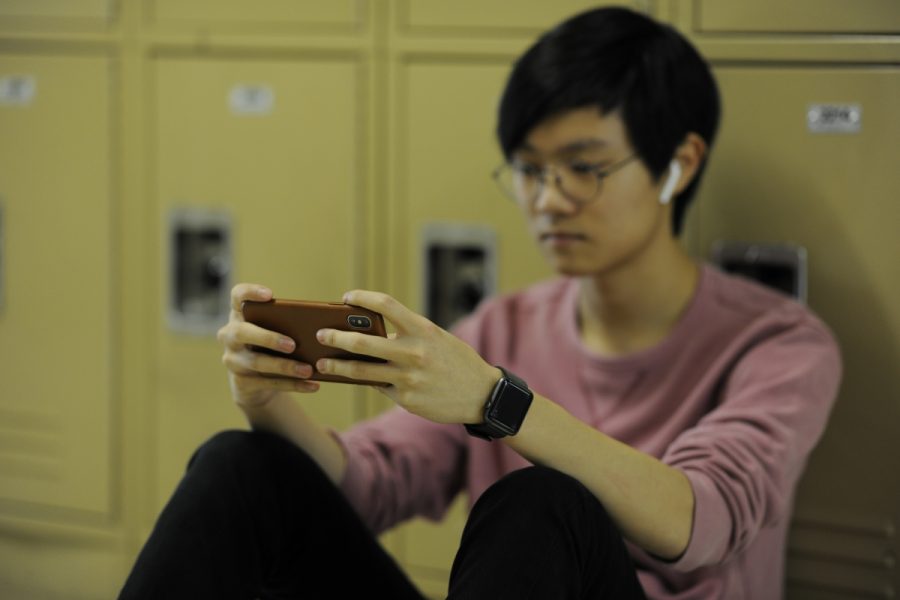 Celebrating the iPhone’s tenth anniversary, Apple has launched a radically different phone: the iPhone X. Decidedly unlike its predecessors, the iPhone X has a bezel-less OLED display. The lack of the home button differs from what is usually expected from iPhones. The user experience also differs as its new interface is all gesture based. Physically, the iPhone X has a unibody design with its core components sandwiched between two pieces of glass.

The general consensus is that the phone is a great device. One of the headlining features of the iPhone X is Face ID. FaceID is a new way to unlock the iphone using a combination of depth sensors and infrared camera to map your face. According to Apple, FaceID is about twenty times more secure than Touch ID found on previous iPhones. It also recognizes your face even if you have glasses or hats on. Many students have found that this new feature works very efficiently. Esh Chhura ’19 said, “Face ID also allows for quicker access to things.”
“There wasn’t much of a transition at all, because Apple made it so convenient to switch between apps.”
Continuing its pattern of removing physical elements from their iPhones, Apple’s new model has no home button. This made for a new way of interacting with IOS: Gestures. Gestures have always been part of the Apple ecosystem, but with the iPhone X, they have become more important than ever. They enable the user to do everything, from closing apps to accessing the control center. For example, swiping up from anywhere on the screen will bring you to the home screen. Other gestures have been trickier for users to master. Even though there was a learning curve to this, students grew accustomed to the new gestures pretty quickly.

“There wasn’t much of a transition at all, because Apple made it so convenient to switch between apps, and to go to the home screen. [The gestures] are all really smooth, and they don’t really interfere with any app feature that I use, even if some of them aren’t updated for the new phone’s screen size yet,” Christopher Jang ’19 said.

The iPhone X is the first Apple device to feature a bezel-less, 5.8 inch OLED (Organic Light Emitting Diode) display. Apple calls this display the “Super Retina” display. With an OLED display, the screen is now brighter with deep blacks and eye-popping colors. Videos and photos look more lifelike than ever. Since the display is bezel-less it has a smaller dimensions than the iPhone 8+; the size of the iPhone X is slightly bigger than the iPhone 8. This new display is well received by users.

Eshaan Modi 19’ described the screen as “really big, [but] it doesn’t feel like a big phone. It’s small, yet it seems big.”  Yi Chieh (Victoria) Yu ’18 said that the full screen is her favorite iPhone X feature.

Other features of the iPhone X include wireless charging, an upgraded camera, and support for AR (Augmented Reality). The upgraded dual rear cameras take better low-light photos. In addition, the new A11 Bionic chip enables better HDR and portrait modes. A combination of the new processors and camera enables the iPhone for AR apps. One such app is Sky Guide, an app that lets users see constellations in the sky in real time based on their location.

Even though this is a brand new phone, students feel right at home with it. The iPhone X is truly an extraordinary flagship from Apple.