The OZ Effect on America

The media’s war on Superman 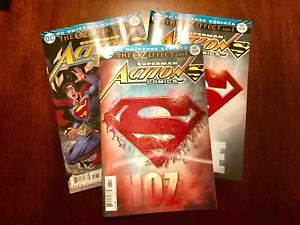 The three covers from Action Comics #987, which sparked a major news argument about immigration.

After racing around the world to prevent several disturbances of the peace, Superman was finally confronted by the figure that had been manipulating events surrounding his life for the past two years, Jor-El, his Kryptonian Father! However, that’s not what sources like Fox and Breitbart News took away from Action Comics #987, which premiered September 13th, 2017, as the first part of the storyline, ‘The OZ Effect.’

The Fox News headline declared how Superman defended “illegals against [an] angry American,” referring to a scene within the issue where the man of steel flew in front of a swarm of ongoing bullets targeting a group of foreign workers and deflected them with his bulletproof skin.
The comic issue itself came out a week after President Trump’s revelation that the DACA program would be shutting down.
Superman proceeded to take the gun from the assailant’s hands, who yelled at the hero, shouting, “They stole from me! Ruined me!” Previously in the issue, the man was laid off from his job, where the villain of the story, Mr. Oz, told the man that the reason that he was fired was because of the supposed illegal immigrants (although no distinction was made). The man proceeded to take a gun out of his car trunk, and the scene played out.

The comic issue itself came out a week after President Trump’s revelation that the DACA program would be shutting down, preventing the protection of hundreds of thousands of illegal immigrants who arrived in the United States at age 10 or under. A majority of those protected by DACA, or Deferred Action for Childhood Arrivals, had no control over their situation, most of them having never known their supposed ‘home’ country. Even the House speaker, Paul Ryan, showed his support for DACA, showing interest into making the act a law. However, on Tuesday, September 5th, 2017, Trump announced the end of the DACA program.

Mere hours after the issue was released on September 13th, 2017, the controversy began. This included Breitbart News which stated that saving the “aliens” was an act of “super socialism,” and Fox News stating that the bullets were ‘meant’ for the illegals. Then, to add insult to injury, the sources demanded that Superman should have flew the immigrants back to their home country. However, these sources never actually cited the comic itself, instead quoting mainly a Hollywood Reporter article and only reusing the image that went along with it (as well a promo image for the film ‘Man of Steel’).

These sources make one question whether the reporters have read the original comic themselves, while more liberal news sources, like the aforementioned ‘Hollywood Report’ article, cite several scenes other than the major incident. In the line of the incident, the Reporter stated that they would “expect no less” from Superman, especially due to the fact that the character himself is an immigrant, having been born on another planet. Inverse.com also points out that “Superman is/was an undocumented refugee who would qualify for DACA.”

This caused more uproar from both sides on Twitter, leading the writer of the issue, Dan Jurgens, to tweet, “The fact that a few people object to Superman saving innocent, unarmed people pretty much proves the point of the story, sad to say.” Jurgens was referring to the motivations of the villain of the story, Mr. Oz/Jor-El, who claims that humanity does not deserve his son due to their violent and bigoted nature. This went on to reveal that Jor-El has seen the worst of human history, with scenes of him witnessing the Holocaust, Klu Klux Klan riots, and the atomic bomb.

“These lost souls don’t deserve another second of your life.” The character went on to say, “Gather your things, I’m taking you away from here… forever.” Dan Jurgens concludes “The OZ Effect” in Action Comics #991, while the implications of the events within continue in Detective Comics #968, both premiering on November 8th, 2017.