No Shade in the Shadow of the Cross

A retrospective on 'Carrie & Lowell' 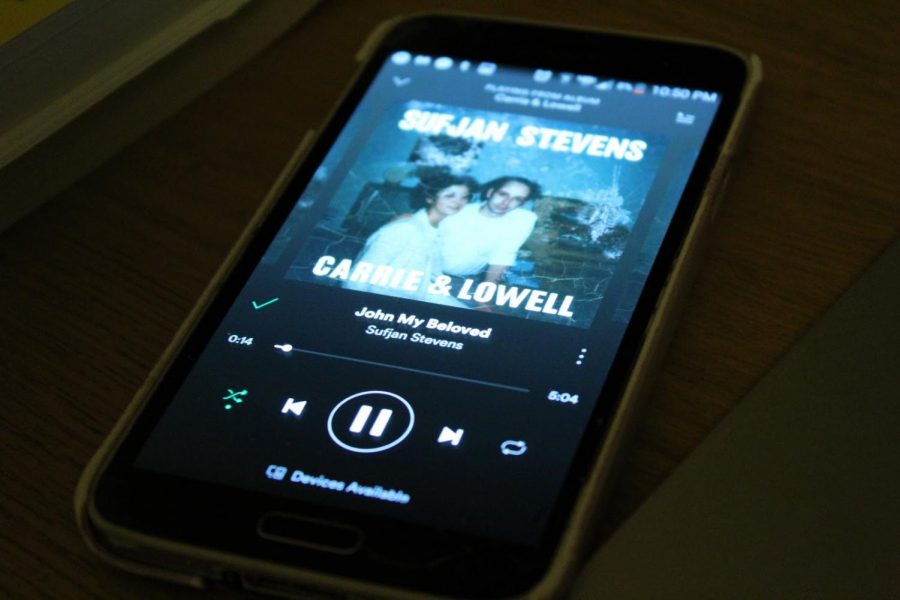 A phone plays the track “John My Beloved” off of the album ‘Carrie & Lowell.’

Art is typically defined and measured by its ability to have an impact upon its audience. If this is a truth, then there is no album that I can commend higher than ‘Carrie & Lowell’ by Sufjan (pronounced Soof-Yahn) Stevens. The album was released in 2015 to widespread critical acclaim, garnering a 9.4 on Pitchfork, a notoriously difficult-to-impress music review website, and quickly rose to become the defining album of that year in the eyes of many. Despite all this pomp and circumstance, it’s a difficult album to talk about. ‘Carrie & Lowell’ is a steep cliff to scale, in every possible way, but one that is fully worth it.

To the uninitiated, Sufjan Stevens is, in the broadest terms, a folk musician. Those who regularly consume his works know that this is a gross understatement of who Sufjan is as an artist, but it’s an easy label for those who don’t know him. His most recognizable musical staples include liberal use of banjos and guitars, sweeping orchestras, a uniquely soft voice that often breaks into angelic falsetto, and a fervent dedication to the American gothic, and its role in his life. Ideas of spirituality, mythology, homosexuality, and religion are some of his more frequent lyrical themes. All of this and more is heart-wrenchingly brought out out in ‘Carrie & Lowell.’

In 2012, Sufjan’s mother, Carrie, died of stomach cancer. Sufjan had a complex relationship with his mother, who struggled with schizophrenia and depression for most of her life, and abandoned him when he was a year old. The album reflects on a few summers that Sufjan spent with Carrie and his stepfather Lowell in Oregon later on in his childhood (Sufjan lived with his biological father in Detroit) and Sufjan’s self-destructive fallout from the aftermath of Carrie’s death.

The musicality of ‘Carrie & Lowell’ is the stage for the rest of the album, and in it we see Sufjan at full force. He returns to his roots of simple folk, and, in a hotel room in Oregon (the air conditioning system of which can be heard in several tracks) recorded on an iPhone, he strums the complex and winding melodies of life and loss. This recording setup is designed to invoke nostalgia, specifically Sufjan’s nostalgia for those summers in Oregon. At the same time, it strikes a universal chord, of summers with relatives and staying in cheap hotels and learning how to swim.

Personal against universal is one of the many facets of duality that Sufjan employs throughout the album. Light and dark, hope and loss, death and rebirth. These consistent tones serve to create a stark and fairytale-like atmosphere that carries a uniquely Sufjan kind of magic.
‘Carrie & Lowell’ is not afraid of the ugly sides of the human existence.
The power and importance of ‘Carrie & Lowell’ comes from the raw portrayal of life and suffering and self-discovery that Sufjan masterfully weaves between the melancholic notes. In ‘Eugene’ and the track ‘Carrie & Lowell’, Sufjan recounts his learning how to swim and the “seasons of love” during those summers in Oregon. In ‘No Shade in the Shadow of the Cross’ and ‘All of me Wants All of You’, Sufjan sings about his self destructive behaviors following his mother’s death. ‘Carrie & Lowell’ is apocalyptic in the most personal sense of the word. This honesty of the artist is what makes ‘Carrie & Lowell’ so important. It is pure in its emotions and its feeling. It is not afraid of the ugly sides of the human existence. It does not glorify them and put them on a voyeuristic pedestal, but instead paints them as natural, inevitable parts of life.

In this new age of anxiety, the emotional purity of ‘Carrie & Lowell’ is more important than ever. It is easy to live in fear of the unknowns and hypotheticals and possibilities, but in this album, Sufjan pulls our collective heads from the clouds and dares us to face the tangible world in front of us. Focus on the emotions you feel as a result of the state of our existence, and never let go of them, because that is what defines you as human. As teenagers making an ascent into adulthood full of trepidation in such a tumultuous time, Sufjan illuminates the naive happiness of our past, and highlights challenges that await us in the future.

When the last ghostly notes of ‘Blue Bucket of Gold’ fade out, and you are left to contemplate the nature of what you just listened to, one idea sticks out in particular. Despite the inherent struggle of our existence, the world is still worth hanging on to. As Sufjan sings in ‘Should’ve Known Better,’ “Nothing can be changed / The past is still the past,” we have our regrets and bad experiences, and while we can’t change them, we can, and must, find things in our present that makes it worthwhile. ‘Carrie & Lowell’ is the about the confusing tragedy of humanity. We are destined to love and lose in unequal measure. Therefore, love what you can while you can, and don’t forget why you love in the first place.