An Inside Look at the Heart of Geek Culture 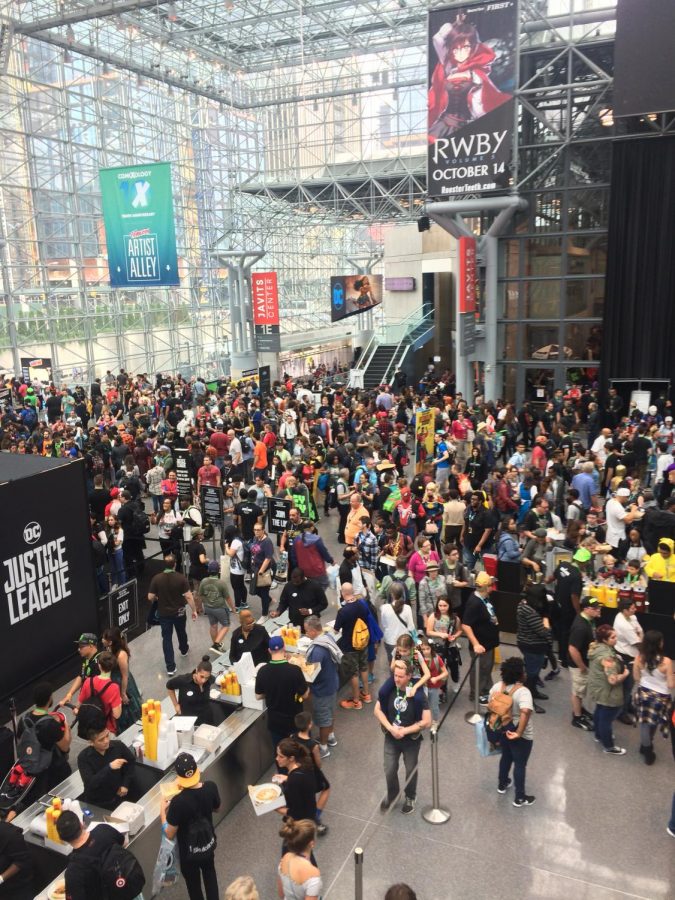 Fans in the lobby of the Javits Center during the 2017 New York Comic Con.

Celebrities, artists, and fans congregated at the Javits Center for New York Comic Con from October 5th to 8th, 2017. It is held annually to unite nerds at the biggest pop culture convention in the East Coast. It previews new shows and movies, hosts panels where fans can engage with creators, and celebrates the art of cosplay.

Panels that are mainstays at NYCC, like that of the TV show “The Walking Dead”, draw big crowds. “I was most excited to go to the Fairy Tail panel, because I was able to meet Hiro Mashima at the Japan Society,” said Ginger Lau ’19. Panels for the new Netflix show “The Punisher” and the cult TV show “Dirk Gently’s Holistic Detective Agency” were among some of the most highly-anticipated content at Comic Con.

Cosplay, the art of dressing up as a character from a movie, TV show, book, etc., has a passionate following among the majority of comic con-goers. “I cosplayed as Kylo Ren, Moana and Nick Fury. I made the Moana costume, but I did a mix of buying and making for the others. I have been to NYCC twice before, cosplaying as Raven from Teen Titans and Harley Quinn,” Amanda Barclay ’18.
“I went to Comic Con all four days. Overall, it was a great and fun experience.”
The Javits Center is currently under construction to add more space. The new space for Artist Alley, where artists show and sell their work, won’t be ready until 2021. Overcrowding became a large concern as walking areas were decreased in size to make more room for exhibitors.

In attempt to reduce crowding this year, NYCC expanded to the Theatre at Madison Square Garden, Hudson Mercantile, the Hammerstein Ballroom, and the New York Public Library. In addition, NYCC only offered single-day tickets to allow more people to enjoy the fun.

“I didn’t cosplay as anything, because I recently haven’t had time to think up of something. Plus, I have to wear a staff t-shirt for the exhibitor, Purple Plum, for whom I was doing promotional support. Also, it’s easier to walk around the super crowded convention center when you aren’t cosplaying,” said Lau.

“I went to Comic Con all four days. I both love and hate the crowd. I love being around like-minded people, but I hate bumping into someone during every step I take. Overall, it was a great and fun experience,” said Barclay.