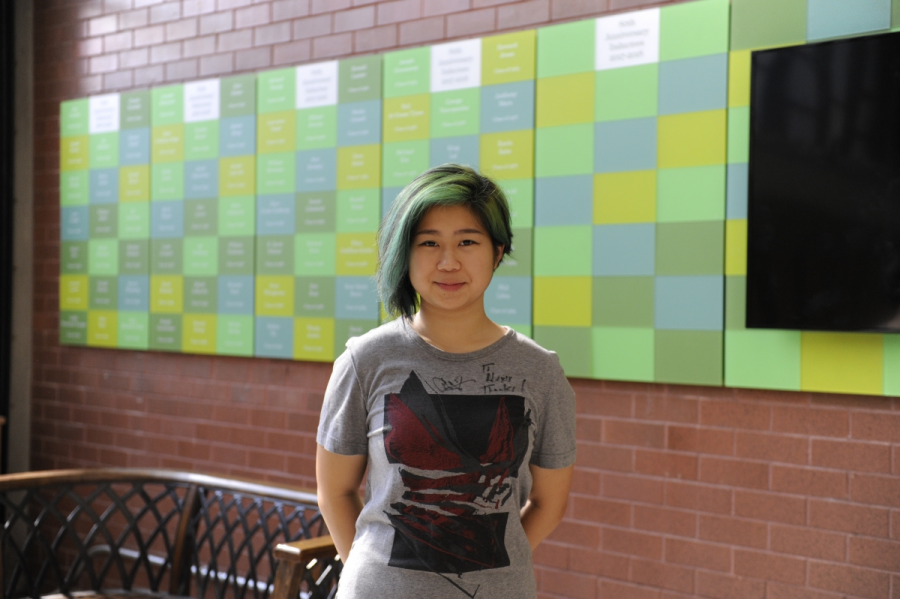 Alexis Pan ’17 wearing the autographed t-shirt that Chester Bennington gave her in 2015.

Chris Cornell, lead singer of Soundgarden and Audioslave and founder of Stone Temple Pilots, was found dead in his hotel room after playing a show in Detroit on May 18, 2017. He committed suicide by hanging.

As fans coped with this, the music world was rocked again when Chester Bennington, lead singer of Linkin Park and former frontman of Stone Temple Pilots, hanged himself on July 20, 2017. This would have been Cornell’s 53rd birthday.

In the most prominent way since the 90s, when Nirvana’s Kurt Cobain and INXS’s Michael Hutchence committed suicide, mental health is being addressed in the music industry. As people offered their condolences, they also acknowledged the effects of depression on not only those who suffered, but those around them.

Alexander Siong ’17 is a fan who remembers the days he learned his idols died. “Chris’s death was a shocker because it was just around the time I had really fallen in love with [Soundgarden’s album] Superunknown, but it wasn’t nearly as bad as my response to Chester’s suicide,” he said. “I was absolutely destroyed by his death. I remember so clearly how after I got the news, I had a throbbing headache for the rest of the afternoon. I couldn’t even listen to his music without feeling this odd sinking body feeling.”

Alexis Pan ’17 has also been a fan of Linkin Park and Soundgarden for most of her life. She saw and met Chester in 2015. “I met him in person after waiting for six hours out in the February cold. He gave me a big hug, had a ten-minute long chat with me, and told me that he believed in me,” she said.

A year later, however, she met him again and he seemed like a different person. “He seemed a lot more stiff and he would jump or tense up suddenly at loud noises or sudden movements. He did recognize me, but instead told me I was stupid for not standing up for myself,” she said.

Pan went on to say, “I can imagine it is often very difficult for well-known people in the music industry or in any industry to be open about being mentally ill, as there is the concern that the stigma behind mental illness could taint their image.”

Following the devastating blows to fans over summer, however, old and new artists came together to publicly address this pressing issue. Up-and-coming rapper Logic collaborated with singers Alessia Cara and Khalid in the song “1-800-273-8255”. The title of the song itself is the phone number for the National Suicide Prevention Hotline.

The song was performed live at the MTV Music Video Awards (VMAs) on August 27, 2017. Khalid came on stage with a group of suicide-attempt survivors who had the number written on their shirts.

The next day, it was reported that calls to the National Suicide Prevention Hotline increased by 50%.

Artists such as Dave Grohl of Nirvana and Foo Fighters and Jared Leto of 30 Seconds to Mars have spoken out about how they feel mental illness isn’t addressed enough in the music industry.
Dave Grohl lost his Nirvana bandmate, Kurt Cobain, to suicide in 1994. In a recent interview with The Rock FM in New Zealand, when Chris Cornell was mentioned, he said, “Chris was such a beautiful guy, man — he was the sweetest person, he was so talented, he had so much to offer — that it was a real shock to hear that he had gone…I think that mental health and depression is something that people should really take seriously.”
“I can imagine it is often very difficult for well-known people in the music industry or in any industry to be open about being mentally ill, as there is the concern that the stigma behind mental illness could taint their image.”
But there is more that can be done by the music industry. Siong ’17 stated that, “Musicians are practically selling their emotions and personal gripes to an audience. You have to pump out songs like this all the time to make it in the industry and it can hurt the musician’s sanity a lot. Many have not been afraid of tackling the struggles of mental illness and/or even their own inner battles. As for the actual music industry, I don’t think it is addressed enough.”

With more and more influential people openly talking about depression and mental illness, there is hope that it will become a transparent topic in today’s society.
But, as Pan ’17 said, “The most valuable thing we can all do now is to give kindness and love to those around us, no matter how small of an act it may seem. Life is precious, and once it’s gone, it’s gone.”