Yuri!!! on Ice is Young, Original, and Inspiring 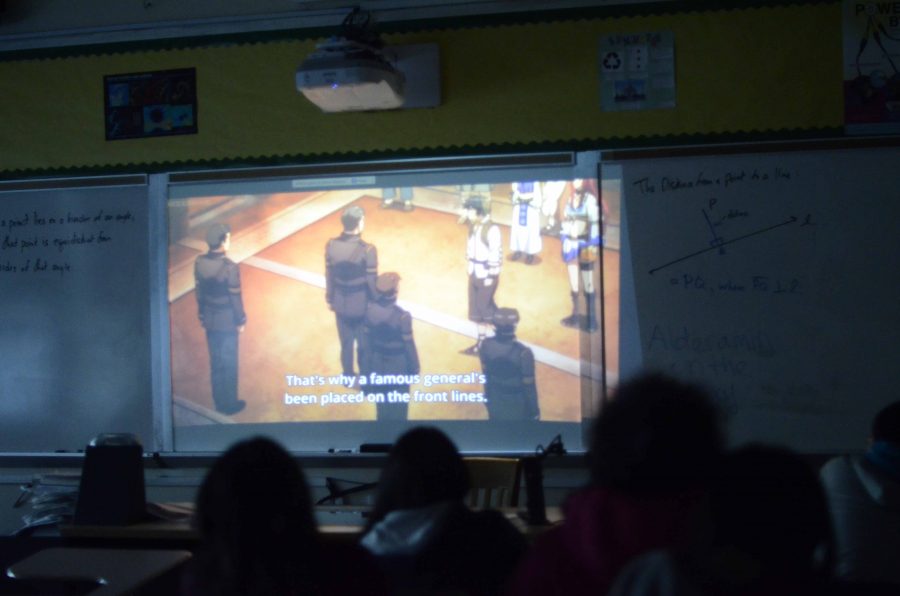 Anime is very popular at Bronx Science. Many students are in the Japanese Animation Club, pictured here watching an anime.

At the end of last year, a new show was released in Japan that had everybody waltz jumping for joy: Yuri!!! on Ice.

The anime follows the story of professional Japanese figure skater, Yuuri Katsuki, after he suffers a crushing defeat in the Grand Prix Finals. Yuuri is coached by the world’s figure skating champion from Russia, Viktor Nikiforov, who also was his childhood idol. He begins a romantic relationship with Viktor and goes on an emotional journey to regain his confidence after losing spectacularly in the previous Grand Prix Final.
“The show does a really good job of portraying frames of mind and gives a realistic perspective of anxiety and depression,” said Dominika Sluszkiewicz ’18.
The show has garnered high praise in its story as well as its artistry. The design of the show has a stunning flow to it, and the skating is graceful and life-like. The show hired professional ice skating choreographer Kenji Miyamoto to make the ice skating look as real as possible. This has inspired many aspiring figure skaters to reenact the routines and post them on YouTube. Even Evgenia Medvedeva, who is currently the number one in the world standings for female figure skaters, has gotten in on the action by posting photos of herself cosplaying as the protagonist.

Every aspect of Yuri!!! on Ice adds to its holistic appeal and aesthetic. The musical score of the show is fantastic and ranges from soft instrumental pieces to Broadway-inspired songs, to rousing rock anthems. In addition, there is beautiful attention to detail, such as how they accurately replicate the locations surrounding real figure skating competitions.

Yuri!!! on Ice is successfully setting a precedent for others by creating a discrimination-free world. By painting a world where homophobia doesn’t exist, the show is able to focus on the strength and growth of relationships between characters rather than the fear of one.

This new anime features strong representation of gay and lesbian people and mental health issues, and it has drawn great acclaim for its overt depiction of gay and lesbian couples despite the fact that gay marriage is illegal in most of Japan. Nevertheless, in Japan and even globally, the show quickly gained popularity, as well as a dedicated fan base.

“The show does a really good job of portraying frames of mind and gives a realistic perspective of anxiety and depression,” said Dominika Sluszkiewicz ’18, president of the Mental Health Club, as well as an avid fan of the show. “Mental health isn’t the main point of the show, but the show nods towards it, as the characters do struggle with multiple mental issues.”

Sports animes aren’t anything new, but nothing has been done regarding figure skating yet. In fact, the sport is rarely seen on screens as opposed to other sports such as soccer and basketball.

“There’s a lack of shows and movies about figure skating, because it’s a relatively unpopular sport,” said Rachel Markowitz ’18, who has been skating for about nine years now. “People assume it’s really easy to skate around and jump, but skaters just make it look easy; it actually requires a lot of hard work and practice. There is also a competitive nature to it which makes figure skating a really fun sport.”