When Spider-Man Came to Bronx Science 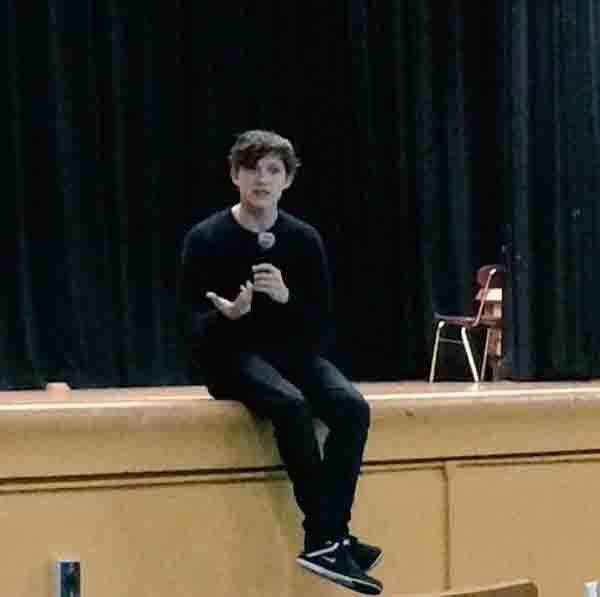 Holland during a Q & A session last year.

For two days last year, there was one extra student roaming the hallways alongside thousands of Bronx Science students. This “student” was Tom Holland, star of the upcoming Spider-Man: Homecoming movie that will be released in July 2017. The then British nineteen-year-old fooled nearly every Bronx Science student he encountered with just a fake name and accent.

“I had the privilege of chaperoning Tom Holland around the school. The Assistant Principal of Organization, Ms. Cooper, knew me through robotics, and Marvel had reached out to her to find a student whom Tom could shadow who was STEM-oriented like Peter Parker. He pretended to be my cousin, Ben,” said Arun Bishop ’16.

Holland explained that because he went to an all boys uniform school, attending a public co-ed school, even for just two days, helped him hone his role as Peter Parker. At a Q & A session in the Bronx Science auditorium at the end of his undercover visit last year, he described to many students his experience in acting and in Spider-Man: Homecoming specifically.

Holland told students at the Q & A that at one point during his visit, he and Bishop did try to tell one student who he was. “I was like ‘Hey man, listen, I’m actually Spider-Man,’” Holland recalled. “He didn’t believe me.” “It was a lot of fun to be in on the secret.” Bishop added, “Tom and I played a couple ‘pranks’ on students. For example, he had me film him while he jokingly interviewed kids on whether they were Marvel fans, who their favorite superheros were, and what they thought of the new Spider-Man actor.”

Along with recounting details about his visit to the school, Holland also told many entertaining anecdotes about his experience as an actor. One story that particularly resonated with the Bronx Science students present at the Q & A was about Holland’s experience with Spider-Man’s signature hand gesture. As anyone who has seen a Spider-Man movie before would know, Spider-Man has to hold out his hand, palm up, and press his middle and ring finger against his palm in order to release his webs. Holland, however, cannot touch these two fingers to his palm on either of his hands.

“Nobody found out about my inability to do the hand gesture until we actually started shooting the movie. I got the part after auditioning with big stunts, so it was a surprise when we found out that it was impossible for me to do something so simple,” Holland told the students.

The new Spider-Man movie is a coming-of-age story, which follows Peter Parker through his life as high school student at the “Midtown School of Science and Technology”, a fictional school based on Bronx Science. As he tries to survive high school, Parker’s superhero alter-ego faces a new villain, the Vulture, played by Michael Keaton. In addition to Holland and Keaton, the movie will feature the Disney Channel actress, Zendaya, who will be playing Mary Jane Watson, Parker’s chief love interests in the Spider-Man comics.

“I am so excited to see Spider-Man: Homecoming when it comes out. I’m a huge Zendaya fan, and I love the original movie, so I want to see if they can pull off making one in such a completely different generation,” said Alena Blaise ’18, one of many students who attended the Q & A last spring. “I was shocked when I found out that some random guy had been roaming our halls for three days, but when I met him at the Q & A and heard his story, I thought it was hilarious,” Blaise said.

Along with many other members of the S!NG Club, Blaise got the opportunity to ask Holland a question about his work. “I asked him about how he manages to stay positive while pursuing a career that is known for how many rejections it hands out,” Blaise explained. “I always have a backup plan,” Holland replied to her question, “That way, if I do get rejected, I’m not left wondering what to do or where to go next.”