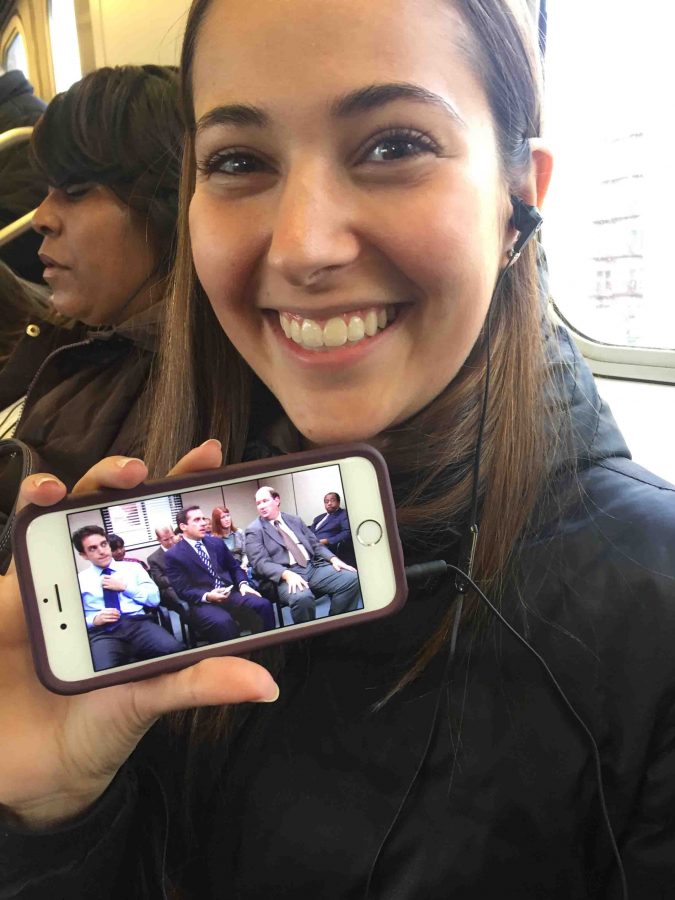 Sabrina Scollar ‘17 unwinds during her commute home by watching The Office through Netflix’s offline feature.

It is the moment everyone has been waiting for — viewing Netflix offline. A large population of teens are Netflix enthusiasts, and they could not be more excited to watch Netflix when they are offline.

“It is such a hassle trying to connect to random WiFi networks, and now I won’t have to do that! I am a Netflix-addict, and I watch at least one episode every day. This is the best news,” Sabrina Scollar ’17 said.

Netflix’s new offline viewing update allows users to watch Netflix original shows whenever and wherever they want. People can now watch in the car, in a WiFi-less restaurant, on a plane, or even in school. “I always am so bored when I am on planes, because I have nothing to do. Hearing the news that I can now watch Netflix on the plane made my day,” said Ellery Weiner ’18.

This has been one of the most requested features for the video streaming platform, and with the latest update, Netflix users can watch their favorite shows either by streaming them online or downloading them for offline viewing with no extra cost. This means that Netflix original shows, such as Stranger Things and Orange is the New Black, can now be easily watched at any time.
The offline viewing feature is available on all Netflix plans and on all platforms.
Netflix officials point out that while many of its users currently stream video at home, the company also wants to enable subscribers to continue streaming even while in areas with limited, expensive, or nonexistent internet connection.

To download a show for offline viewing, users can simply open the details page for a movie or television series and click a download button. “Learning about this new update, I am going to go home and download an entire movie, so that I am prepared for whenever I don’t have internet and want to watch a film,” Sam Grossman ’17 said.

According to Netflix, the same amount of data is used to stream Netflix episodes on your phone as is used to download episodes for offline viewing, so there is truly no downside.

Netflix offline viewing has been a long time coming, and earlier rumors hinted at a release by the end of 2016, which, to the delight of many viewers, turned out to be accurate. “I am so excited to start watching Netflix offline. Honestly, this is a dream come true,” Klara Wichterle ’17 said.