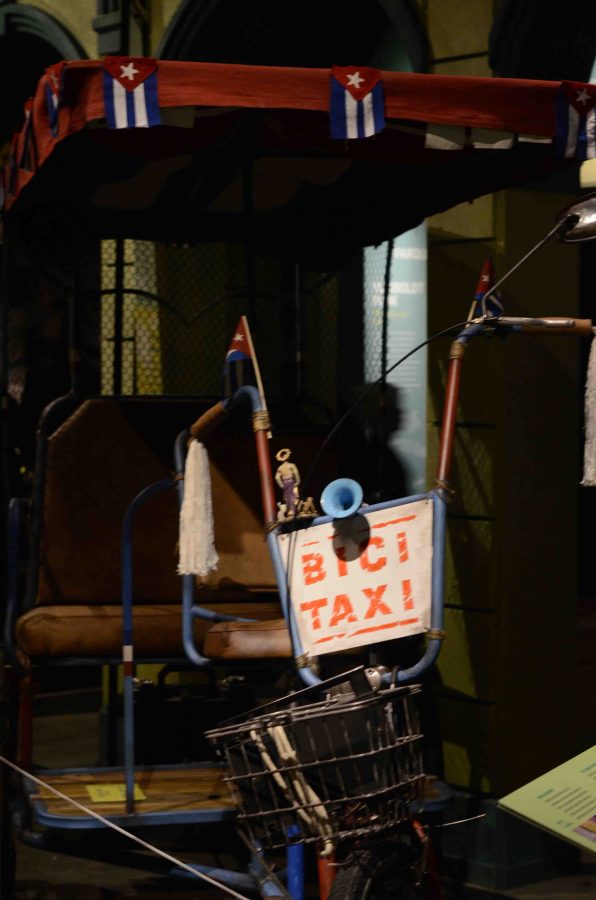 A taxi that resembles those found in Cuba was featured in the museum exhibit.

Cuban culture has made its appearance in New York City at an exhibit in The American Museum of Natural History. The exhibit, titled “¡Cuba!”, opened on November 21st, 2016 and runs through August 13th, 2017. This exhibit pays tribute to the vibrant culture of the country, displaying works from artists and interviews from actresses, artists, dancers and other locals. The exhibit also included interviews from former natives now living in the United States.

Cuba’s rich music, food, and art was shown in the exhibit. In addition to the culture, the exhibit also reflected the flourishing religious life of Cuba. Myriad religions are present in the country and were shown with objects and interviews, both from Cubans now living in the United States and those still in the country.

Pictures of Cuba’s beautiful landscape lined the walls, showing the biodiversity present in the country. Though the exhibit highlights Cuba’s rich culture and natural resources, the exhibit also briefly touches on the embargo with the United States, which caused financial hardship to Cuba. Interviews with artists reflected their lack of access to materials. Despite limited resources, interviewees seemed positive and nationalistic.

The exhibit celebrates the truly bold culture of Cuba, yet it belittles the economic barriers that residents of the country face. The limited access of the people to food and work materials was seemingly solely attributed to the Embargo in only one paragraph. The former dictator of Cuba, Fidel Castro, and his impact on the country was not a main focus; rather, the exhibit focuses on the diverse and rich aspects of Cubans’ lives. Cuba is a somewhat foreign subject to some Bronx Science students, but they do know who Castro is.

“I don’t know that much about Cuban culture, but it seems interesting. I do know, however, who Castro is and that he created Cuba’s economic system,” said Dashall Nelson, ’17,.

Fidel Castro passed away on November 25th, 2016, in Havana, Cuba. With his death, the culture of Cuba may be able to flourish to its full potential. Under Castro’s regime, Cubans were restricted in their daily necessities and limited in their options for career success. This did, however, “encourage more creativity,” according to a local artist.
“‘¡Cuba!’ highlighted the country’s achievements in dance, art, theatre and film, and addressed the economic constrictions that the country faced.”
The exhibit touched upon this concept with interviews from Cubans who moved to the U.S. in order to gain more opportunities. Cuba’s beautiful culture was undermined by the country’s lack of economic possibilities. This was alluded to by a former NYU professor originally from Cuba, who said that she had to go to the United States in order to obtain a job as a professor.

While the exhibit pays homage to Cuba’s culture well, it could have been more clear on Castro’s impact upon the country. However, the museum is generally well regarded and displays exhibits nicely, this one being no exception.

“¡Cuba!” highlights the country’s achievements in dance, art, theatre and film, and addresses the economic constrictions that Cuba has faced, preventing the country from fully engaging in the arts. This restriction was attributed chiefly to the embargo with the United States.

The exhibit highlights the diverse artistic, cultural, and religious life of Cuba and Cubans living across the world.