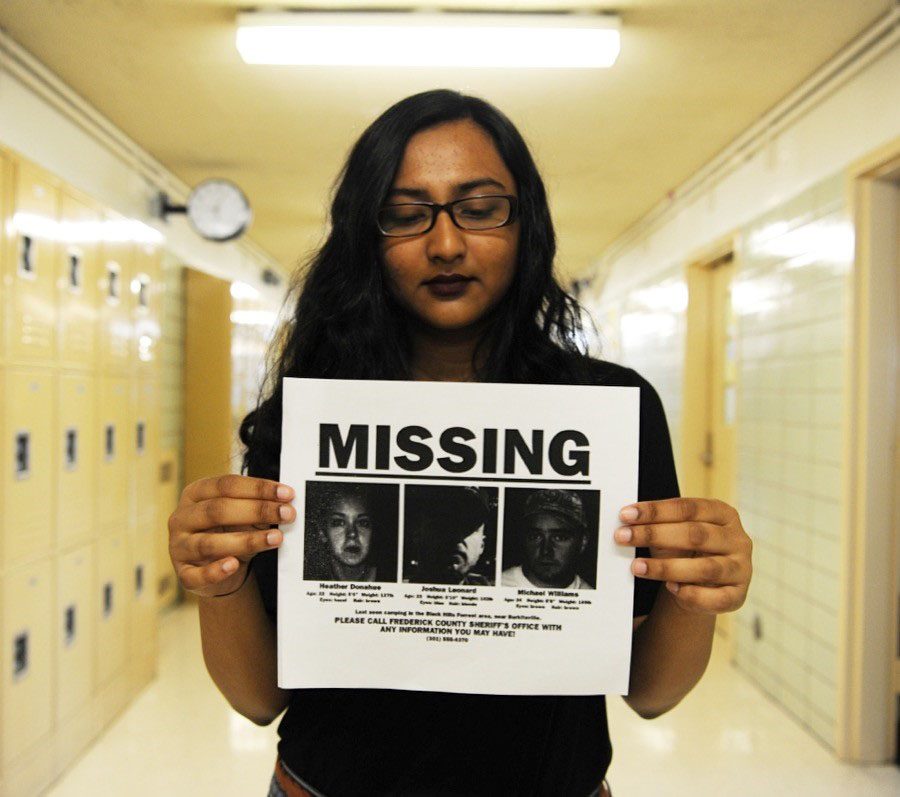 Arifa Abid ’17 holds a missing persons flier that was distributed before The Blair Witch Project Premiere.

In 1999, an indie film that took place in a small town of Burkittsville, Maryland, with a mere budget of $60,000, raked in more than 250 million dollars at the box office. What made The Blair Witch Project so unique was that its publicity campaign was beyond creative and possibly the most successful in film history. Seventeen  years later, the legend of the Blair Witch continues as a sequel to the original in Adam Wingard’s new movie entitled Blair Witch.

The Blair Witch Project is often considered to be the first and most popular of the found-footage genre, which are movies based on the actor’s point of view. What made the movie so incredibly successful was not the film itself but rather the development behind it. Directors Eduardo Sánchez and Daniel Myrick created the legend of the Blair Witch years before they started filming, spreading rumors about a witch in Blair, Maryland, who was responsible for the recent deaths and missing persons in the town.

As a technique to further the tale, they fabricated a mock website featuring fake police reports, documents, and interviews. At college campuses and festivals, “missing persons” flyers were distributed with the faces of the actors in the film. If they were searched up on the Internet, they would show up as “presumed dead” or “missing.” On the bottom, a phone number of the Frederick County Sheriff’s Office was listed for any information on them.

The marketing and campaigning team riled up the public to the point where people could not distinguish whether the footage “found” was real or just fictional horror. Almost two decades later, Adam Wingard directed the sequel to the psychological horror film with a budget of $5 million, but it wasn’t anywhere near the hit that fans were expecting. It premiered on September 16th, 2016, and the movie managed to acquire only $10 million during its opening weekend, and a total $35 million both domestically and internationally. This is perhaps due to poor ratings from popular critics such as Rotten Tomatoes (36%) and IMDb (5.5/10).

“I definitely expected a lot more from the new movie, considering how big The Blair Witch Project was,” said Motiur Rahman ’19. “I wasn’t even born when it came out, but I definitely enjoyed how unusual it was compared to other horror films, which is why I was so excited to buy a ticket when I heard they were making a sequel. But Blair Witch was just too simple compared to the hype behind the original.”

The recent movie centers around a young man (James Allen McCune) who sets out to the Black Hills Forest where his sister disappeared when he was just a little boy. Certain that her disappearance had to do with the legend of the Blair Witch, his friends join him to unravel the mystery behind the strange occurrences in the area. The group quickly finds out that the dark woods hold many surprises, and the night holds many terrors. By the time they come to terms with the fact that the Blair Witch is more than just a legend, it’s too late to escape.

The movie is still showing in numerous theaters but is likely to be pulled soon, due to low profits. Although the technology for film and effects have certainly modernized and are improved, most viewers of both films agree that the originality of the The Blair Witch Project was unbeatable.