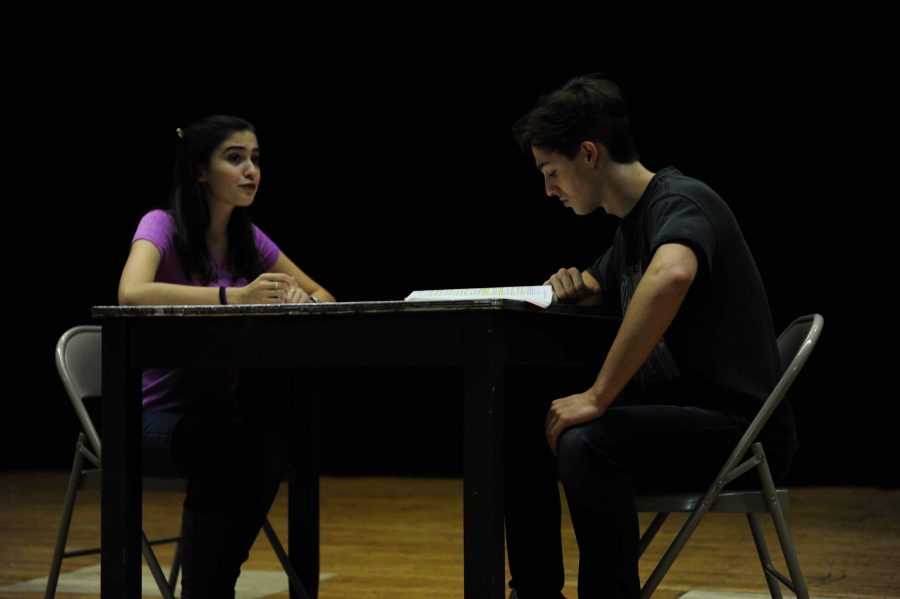 Drama students rehearse a scene from 'The Importance of Being Earnest.'

Save the date because the Bronx Science Drama Department is back at it again with yet another stunning production. On December 7th, 8th, and 9th, 2016, they will present a production of The Importance of Being Earnest. Originally a play by Oscar Wilde, The Importance of Being Earnest has received multiple adaptations, from its 1952 film to the most recent 2002 film. Now, this acclaimed classic play is getting its own Bronx Science spin!
“We are surrounded by people who love being here and working on the drama production.”
“The Importance of Being Earnest is different from anything we’ve ever done before. It is a British comedy that one needs to listen to carefully and attentively; otherwise, you might miss the joke. The play is silly and easy to follow, but, at the same time, there are satirical comments about upper class British Society,” said Robert Brown, the Drama Department moderator.
The chosen play isn’t the only thing that’s different this year. After news of Mr. Simpson’s absence from this year’s productions befell the stage crew, many members wondered how they would build this year’s sets without him. As the technical set designer, Mr. Simpson played a vital part in creating the sets and backdrops for the plays and musicals for the past few years. Over the summer, he left Bronx Science to teach in the suburbs.

“He put so much into the show, so it’s going to be different without him,” Noa Berman ’17 said.

Despite his absence, however, the cast and crew are determined to put on on yet another astonishing production. They are assisted greatly by Mr. Mendoza, a technology teacher of great skill and consummate knowlege of his craft. “We are getting by, and we are crossing many hurdles, because we are able to work so well together,” Alejandro Torres ’19 said.

Although Mr. Simpson can no longer physically be there to aid the stage crew, the knowledge that he has passed on has put many members at ease. He still frequently replies to inquiry e-mails from students with helpful tips. In fact, returning and new members of the crew are faring far better than they expected. Through his absence, they have learned a lot on their own about light, sound production and set designing.

“We are surrounded by people who love being here and working on the drama production,” Berman added.